Cheap stocks continue to be the land of opportunity for aggressive investors.We END_OF_DOCUMENT_TOKEN_TO_BE_REPLACED

A Short Seller Bets It All on a Spectacular Market Crash

Russell Clark’s entry into the high-stakes world of investing could hardly have been less promising. As a graduate trainee at UBS Group AG in Sydney, he was wowed by friends getting rich by day-trading tech stocks in 2000. So he spent his first few paychecks on five dot-com shares. Four crashed to zero, and the fifth lost half its value as the tech bubble burst.

That lesson was so brutal that it helped turn Clark, now 45, into a career contrarian. These days the hedge fund he runs for London-based Horseman Capital Management is prepared for a market crash. It’s an audacious contrast to what’s been the most popular trade in town for years: wagers that stocks will keep rising. What’s more, with a resolve virtually unheard of in the industry, he’s been betting on stock declines for more than seven years.

In a world dominated by ultralow interest rates and central bank interventions, bearish strategies have led to excruciating losses for hedge funds. During each of the past three years, more hedge funds have closed than have opened. Yet Clark remains convinced that a crash is near. And if he’s mistaken?

“This could be my farewell interview,” he says.

Clark is slumped casually in a chair at Horseman’s offices inside a small, unassuming house in a quiet mews near Buckingham Palace Gardens. Then he brightens, stalwart in the belief that his fund, Horseman Global, is going to be all right. “But if my views are correct,” he says, “it’s not going to be good for anyone else.”

Of late, persistently buoyant equities markets have tested Clark’s skepticism. Horseman Global lost 15 percent of its value in the first quarter as the S&P 500 index climbed 13 percent. The fund lost a further 12.2 percent in April before gaining 4.3 percent through Wednesday in May. Clients are fleeing. Assets have halved, to $690 million, in the previous two years.

But Clark is holding steady. His contrarian thinking has withstood a decade-long bull market. He’s been net short equities since 2012 and made money. In each of the S&P 500’s worst five months since 2012, Horseman Global earned bumper profits. And in the most recent sell-off, in December, when the index suffered its biggest loss since early 2009, Horseman’s fund surged 13.5 percent.

Clark isn’t a name that most mom and pop investors would recognize. But within the confines of the hedge fund world, he’s a star. His video interview last year on the Real Vision subscription website was one of the most requested of 2018.

His fund is a roller coaster ride: Losing or gaining more than 5 percent in a given month isn’t unusual. It’s not for everybody. “He has made money over time, and some people love him, but we found [his fund] to be a bit too volatile,” says Rob Hawcroft, a former executive at HSBC Asset Management’s alternative investing unit, which invests in hedge funds. 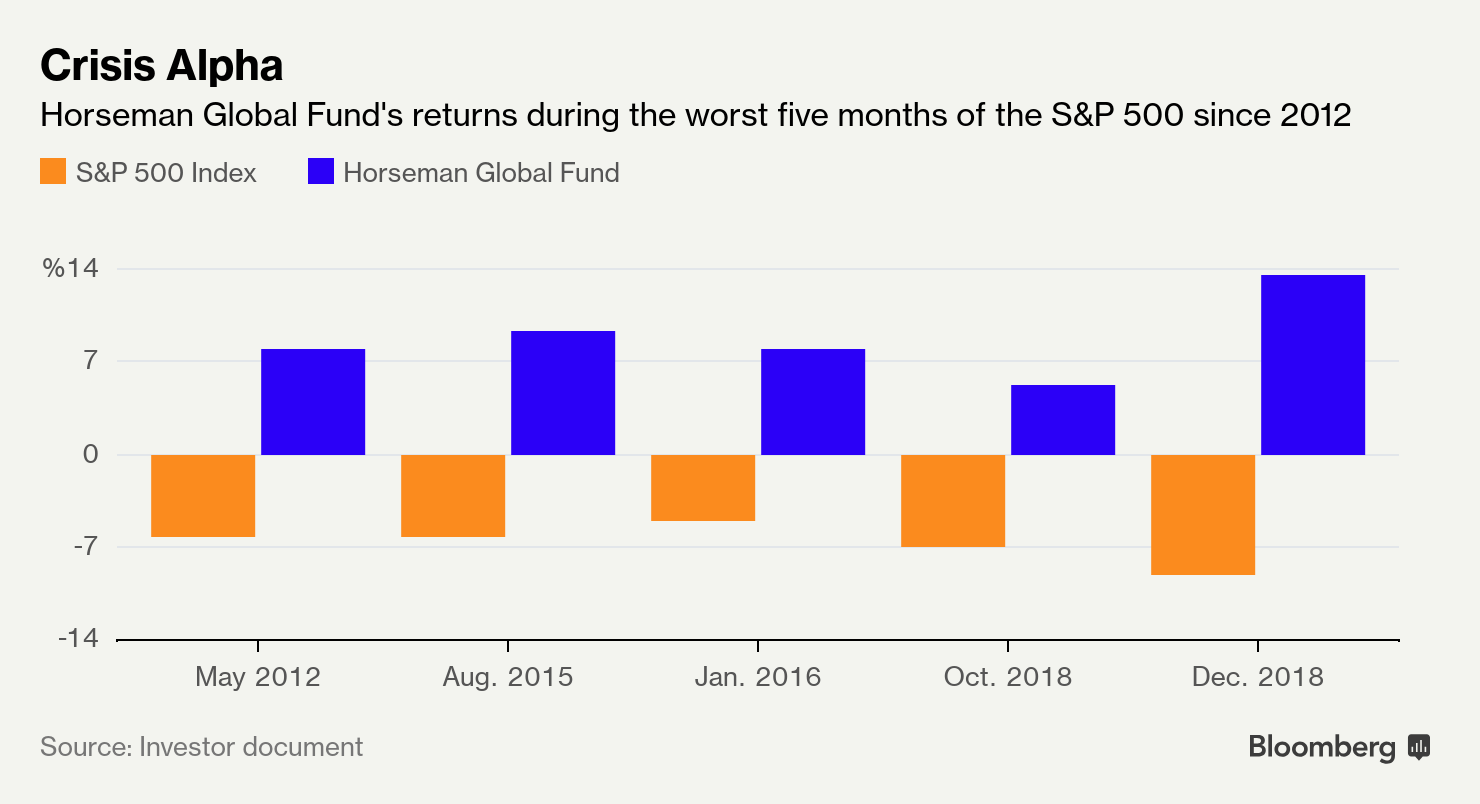 Tim Ng, chief investment officer of Princeton, N.J.-based Clearbrook Global Advisors LLC, says his fund pulled its money for similar reasons. “The stretches of negative performance and the high volatility of monthly returns became a consistent drag on our portfolio’s overall return, which prompted us to redeem,” he says.

The vicious December sell-off, crowded trades, low trading volume even during market rebounds—these are signals to Clark that the market is about to crack. Which for him is good news. “The stars are aligning, and the markets are complacent,” he wrote in January. “Get the popcorn ready, it’s showtime.”

Clark has a front-row seat. He’s shorting the U.S. dollar on a number of bets. He’s trained his skepticism on U.S. shale companies, which he calls “capital destruction machines” that produce oil but no money. Then there’s his wager that autocallables, complex equity-linked securities that aim to generate regular income for their buyers, are going to collapse and volatility will soar. Investors hungry for yields have piled into autocallables, artificially suppressing stock market instability. This, he says, is “unsustainable and will end badly. I’ve seen it twice, three times even. And it feels so close to that inflection point. Everyone’s in the same trade.” 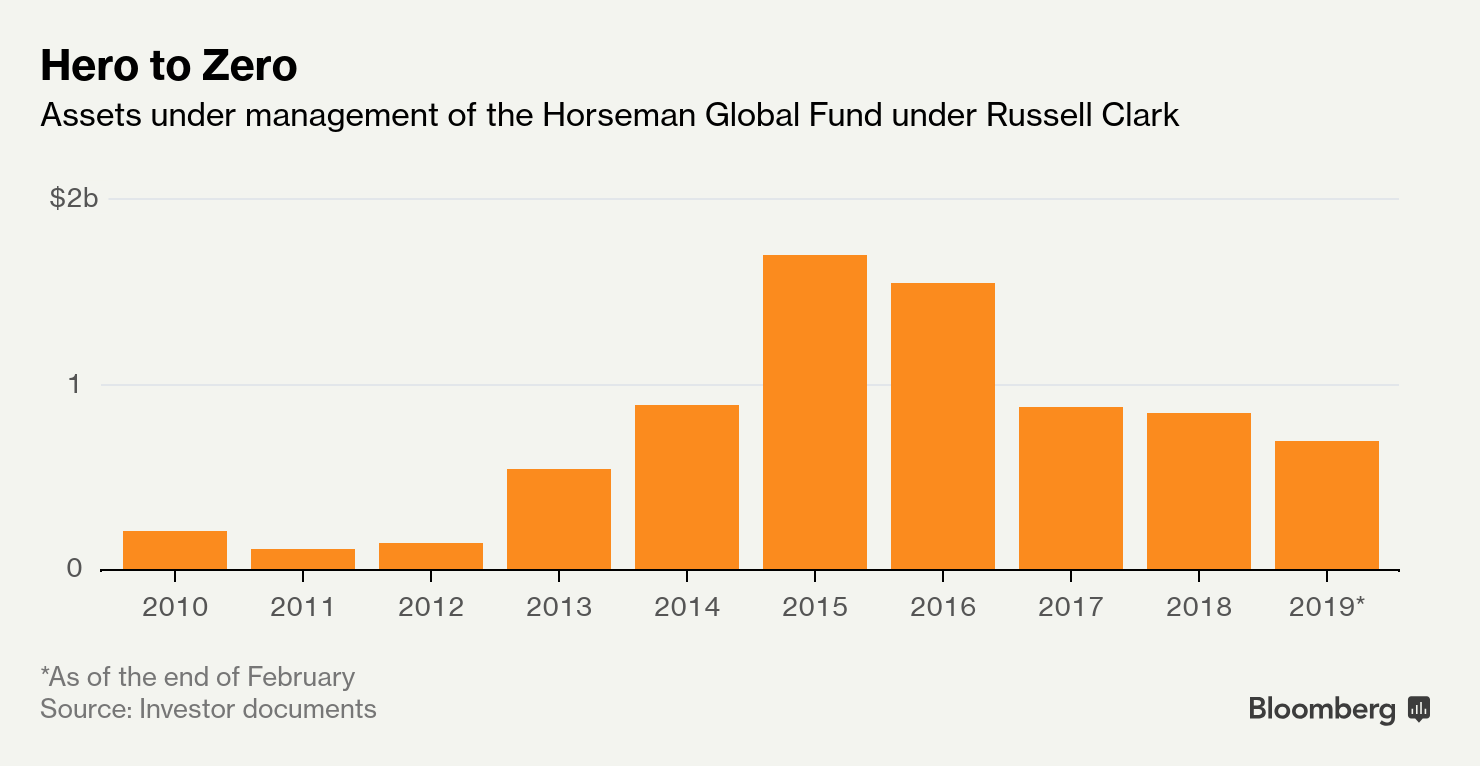 Born and raised in Canberra, Australia, Clark almost wasn’t allowed into the U.K. In 2002, in his second year as a full-time UBS employee, he landed in London on assignment for a subsidiary company and focused on emerging markets. Customs authorities wouldn’t let him in because his salary, in Australian dollars, didn’t make the cutoff when converted to pounds. They relented when he said UBS would pay his rent.

By 2006, Clark’s fortunes had begun to improve. Horseman Capital recruited him to start an emerging-markets hedge fund. His big break came in 2009 when John Horseman, the firm’s founder and a highly successful global stock fund manager in the 1990s, retired from the business at age 40 after losing 25 percent of the net asset value of his fund after the financial crisis. The firm’s partners got together and picked Clark to replace the founder as manager of the Horseman Global Fund. He took over on Jan. 1, 2010.

The transition was painful. The $3.2 billion fund that Clark inherited sank a staggering 96 percent, to $111 million, in just two years as clients, spooked by the management change, withdrew their money. By 2011, Horseman Global had shrunk so much that it was barely economical to run. Clark concluded in 2012 that if he didn’t become a short seller, there was no reason for clients to pay him the kind of fees hedge funds charge.

In 2013, when the S&P 500 index rose 30 percent, he made money by shorting Brazilian equities, which slumped. Shorting global fertilizer companies did incredibly well, and some long equity bets also paid off. That year, Horseman Global made 19.2 percent. Toward the end of 2014, the oil market broke, benefiting Clark’s short positions there and contributing to the fund’s 12.6 percent rise that year. In 2015, Horseman Global soared 20.5 percent, propelled by a continuing oil price slump, short bets that benefited when China’s stock market plunged, and long bond positions.

The year 2016 was a dream turned nightmare for Clark. He started out with a waiting list of potential investors. By the end of the year, Horseman Global had racked up a loss of 24 percent. In 2017 and 2018 clients headed toward the exits again.

Clark, who invests practically all of his own money in Horseman funds, takes the long view. In the nine years through 2018, his money pool has surged about 61 percent, beating the average 35 percent gain across all hedge funds. Reflecting on the bad times, he sees an opportunity. “I’ve been through a number of hero-to-zero periods,” he says. “When people hate you and write terrible things about you, it tends to be the best time to invest.”

It takes patience and trust to stick with Clark at a time when many investors seem to favor a team-led approach over individual managers. “This fund lives and dies with Russell’s macro call,” says Marcus Storr, head of hedge fund investing at Feri Trust GmbH, based in Bad Homburg, Germany, which manages €34.5 billion ($38.6 billion). “Every investor has to understand that his performance is mainly driven by directional investment ideas.”