A Potential Inflection Point for Stocks and Bonds

The last time I wrote in this space, I mentioned we could see a buyable pullback, and we got such a pullback a week later after January OPEX. If you remember, I mentioned there was a considerable gap between implied volatility and historical volatility spread, which is usually a precursor to volatility events. But it can be extremely hard to time, as the gap can remain for long durations like in 2017. Since then, that gap has closed, with the markets seeing a 3.65% pullback in late January that was bought and brought us to new market highs.

Furthermore, the SPX 20-day historical volatility is sub-7%, while SPX implied volatility is 13%, representing a wider-than-usual spread that typically widens as we near inflection points. While this by no means in itself indicates an immediate correction – as we’ve seen this spread remain wider than usual for long periods like the 2017 melt-up -- when it is combined with extreme levels in the 10-day, all-equity, buy (to open) put/call volume ratio, we have the right conditions that can create a pullback or correction to unwind the euphoric behavior.

Currently, with the IV/HV spread much tighter but both IV’s and HV’s being well off their range lows, and neither making it to their extreme highs we typically see in strong capitulation type of corrections, we sit at a pivot point in terms of volatility. We often see this after experiencing a recent smaller type of pullback -- 3-5% -- as market participants are often conflicted as to where we go from here. There is nothing wrong with this, as it’s often a time where we have a lot of unknowns that could cause volatility to ramp up after a pause or dampen back to its lows with a continuing rally in equities. And, I think we all can agree as we approach standard February expiration week that this market continues to see an onslaught of risks from multiple factors, yet seems to want to continue higher at least in the near-term.

Last week the S&P 500 Index (SPX – 3,380.16) opened at the 161.8% Fibonacci level I mentioned in my last commentary and is now acting as support. We got a bullish engulfing candle on Monday that led us to rally for most of the week as we pushed toward the price channel highs, while the Nasdaq Composite (IXIC - 9,731.17) broke above its channel highs, but looks to be at risk of failing. Last week was also a particularly bullish week seasonally, with the week being higher 100% of the time over the last decade by an average of +0.76%. However, we shouldn’t expect this week to be a repeat, as it tends to be more muddled this week after only being up 50% of the time over the last decade and even worst results when we look back through 1928. So, we could be getting another opportunity at a buyable pullback with seasonality entering a bullish period for the markets; we typically see some seasonal drift through April, on average up +1.62% since 1928 after next week. 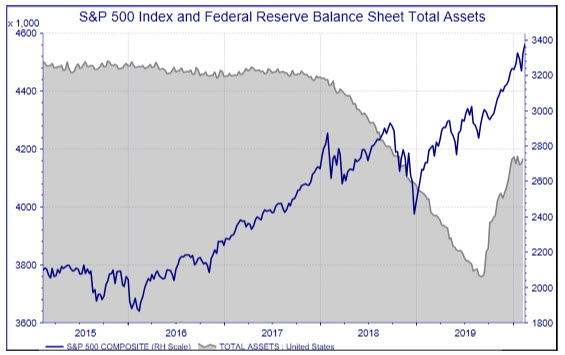 On top of that, last week, the Federal Reserve Chairman Jerome Powell signaled that they are monitoring the coronavirus situation in China closely and would do what is necessary to stabilize the markets if needed to do so. The Fed also confirmed that while they will be winding down their liquidity infusion into the repo markets, it will likely continue through the end of April, and their policies will remain accommodative for the foreseeable future as they continue to take reflationary actions to keep this economic expansion cycle going. 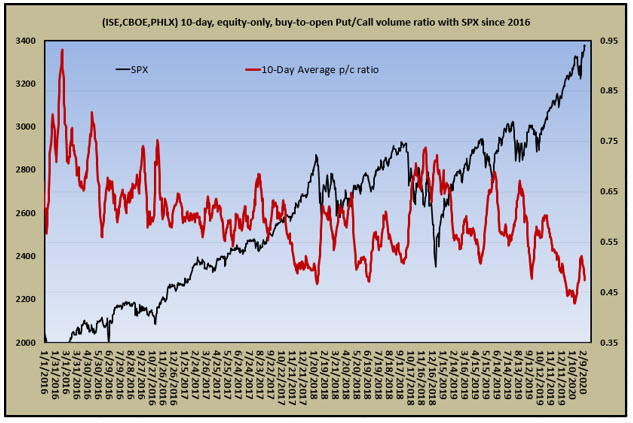 Furthermore, when we look at sentiment, we saw that late-January pullback unwound some of the extreme sentiment, but it has sharply reversed over the last week once again, making moves toward extreme optimism. The 10-day equity-only put/call volume ratio reversed and is now at 0.47 and looks like it wants to press towards its 2014 lows. Also, the AAII and NAAIM Exposure survey both surged back this week, bringing us back to borderline extreme levels. So, while I think market participants can push this sentiment to more extreme levels, a quick pullback could be just enough to get another melt-up in equities.

However, if you looked at interest rates, it would be telling you another story. Interest rates and a few macro-based ratios from an intermarket analysis perspective are telling us bonds are about to rally too. We know bonds and stocks typically diverge in normal market environments, but could we be entering a few months where both rally? Maybe. When we look at a ratio chart of the above Invesco QQQ Trust (QQQ - 234.64)/iShares 20+ Year Treasury Bond ETF (TLT - 144.55), we notice that we are trying to break above overhead resistance again, insinuating that we are near an inflection point where we could continue to breakout or fail.

Moreover, rates are pushing lower and look to break down. Additionally, the copper/gold ratio, which highly correlates with the 10-year treasury yield index, has broken down. For those unfamiliar with the copper/gold ratio, it’s a quotient that pits copper versus gold and serves as a leading indicator for the direction of the yield on the U.S. 10-year treasury note. Furthermore, large speculators have resumed adding to their short positions in the U.S. 10-year treasury note futures as rates press lower, which they’ve historically been on the wrong side of this trade.

Finally, this will be the third test of the horizontal support range level in yields that currently sits between 1.394 -1.336%. We’ll need to hold this range if we hope to not join the rest of the world with near zero interest rates, but when I see setups like this it reminds me of a rusty pipe: the more times it's touched the greater the chance it breaks. This would send us to new lows as we join the rest of the global community near zero.

As you can see, we have a scenario that creates a lot of confusion for market participants. Could we have a Goldilocks scenario where equities continue to rally, and rates continue to fall? This very well could be the scenario for the next couple of weeks or even months. A prudent investor likely wouldn’t put new cash to work here in equity markets other than some speculative bets on individual stocks, but we also don’t have a clear signal to sell for equities either. So, while we wait to see what volatility does in the coming week, the best approach might be to look at some portfolio insurance that could rally with or without equities continuing to rally by getting some bond call exposure using the iShares 20+ Year Treasury Bond ETF (TLT – 144.55).