Last year was probably the toughest in recent history on airline stocks. END_OF_DOCUMENT_TOKEN_TO_BE_REPLACED

GameStop (NYSE:GME) is up 85% over the past month through June 8. END_OF_DOCUMENT_TOKEN_TO_BE_REPLACED

A Foolish Take: This Popular Stock Move Has Failed Miserably

Many people find investing intimidating, and one reason is that the investment community hangs onto traditions that are designed to take what should be a simple process and instead make it more complicated. The stock market has produced strong long-term returns for investors who've had the tenacity to keep their money invested through good times and bad, with long stretches of positive returns like we've seen over the past decade more than making up for the inevitable downturns that the markets suffer from time to time.

Yet there are always people who want to do better than the overall market, and one common method is to seek out seasonal trends. Some use extremely short-term indicators like the Santa Claus rally or the January effect to try to time the market, while others use strategies that play out over months.

One of the best-known such rules involves selling out of the stock market for six months each year. Under the maxim "sell in May and go away," experts urge investors to sell out of stocks at the beginning of May, staying out throughout the summer and early fall and buying them back in November.

This rule has an intuitive appeal. After all, three of the worst periods in stock market history -- 1929, 1987, and 2008 -- brought huge losses to investors during the key month of October. When you look at typical monthly performance, moreover, you tend to find strong periods during December and January, when the rule has you back in the stock market.

However, the rule doesn't always work. Take a look at its recent performance: 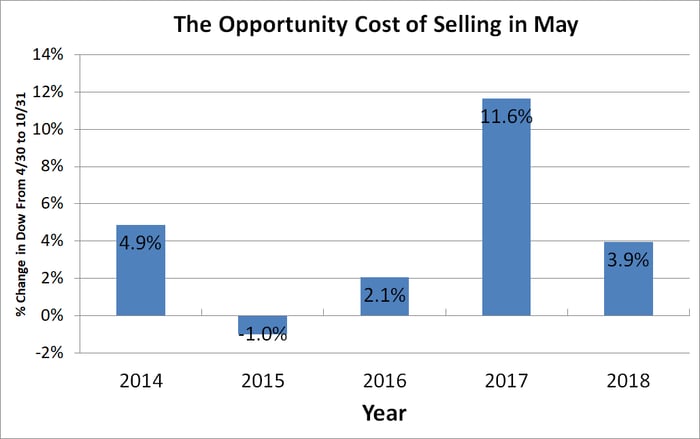 You can see that over the past three years, selling your stocks in May would've made you miss out on solid positive returns. Moreover, buying back in last November would have forced you to endure the huge drop in the stock market during December before the recent recovery that's taken key benchmarks to new all-time highs.

Using such a high-turnover strategy also exposes you to heightened tax liability. Every time you sell shares you've held for just six months, you have to pay the higher taxes that come with capital gains that are treated as short-term rather than long-term.

Buying and holding stocks for the long run has been highly successful for those who have done so. Admittedly, it's human nature to look back at history and figure that by simply avoiding the most likely times for a downturn, you could have done better. Yet more often than not, trying to time the market just reduces your overall return. That makes selling in May a short-sighted way to try to squeeze out a tiny bit of extra benefit.