We witnessed the tale of two markets in 2020.The market experienced a END_OF_DOCUMENT_TOKEN_TO_BE_REPLACED

END_OF_DOCUMENT_TOKEN_TO_BE_REPLACED

Every year in January and early February, the NFL playoffs run their END_OF_DOCUMENT_TOKEN_TO_BE_REPLACED

A Classic Bubble Is Starting To Deflate

Earlier in 2018, Jeremy Grantham laid out a path for a classic bubble in the S&P 500 Index (SP500) which he actually walked back upon in a CNBC interview in the spring of 2019.

We have actually followed the path of that classic bubble scenario, only with a delay, and the bubble appears to be near the end of its expansion phase and starting to unwind in front of our very eyes, as relentless passive fund inflows turn into passive fund outflows.

This reversing of fund flows strikes at the very heart of the bubble, specifically in the leading large-cap growth technology stocks, including the vaunted FAANGs, specifically Facebook (FB), Amazon (AMZN), Apple (AAPL), Netflix (NFLX), and Alphabet (GOOGL) (GOOG), which along with technology growth supernovas like NVIDIA (NVDA), and Tesla (TSLA), and other large-cap technology leaders like Microsoft (MSFT) and Salesforce.com (CRM), are effectively the market's longest duration assets.

Building on this narrative, as fund flows reverse, selling will beget more selling, especially in the largest capitalization equities, as these almost universally loved stocks will become sources of liquidity.

This developing scenario is still not clear right now, as the SPDR S&P 500 Index ETF (SPY) has only been down four weeks in a row, with a very modest decline this past week. Thus, there is still a very palatable buy the dip mentality that will only be erased with a series of lower lows in the nameplate indices, principally the SPDR S&P 500 ETF and the Invesco QQQ Trust (QQQ), which remain heavily concentrated in the leading technology stocks. This very market structure, where momentum breeds even more momentum, which has led to seemingly never ending advances, will work in reverse, and not having exposure to top-weighted index stocks will become an advantage, not the disadvantage it has been for much of the preceding bull market.

Over two years ago, Jeremy Grantham hypothesized in the spring of 2018 that a classic bubble would follow this path. 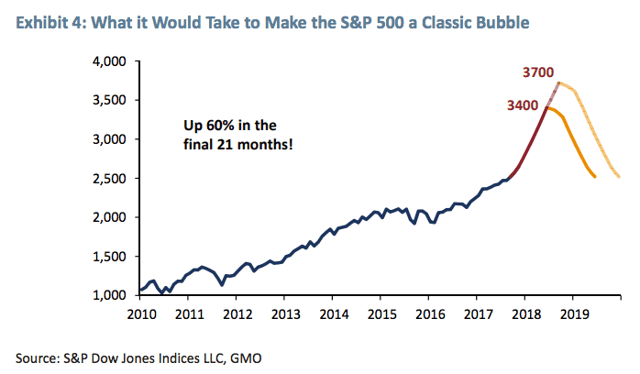 Looking at the S&P 500 Index over a longer-term time horizon shows that we have indeed climbed to these heights, just on a different time frame than Grantham imagined.

Now admittedly, the modest decline in the S&P 500 Index does not look like much in the bigger picture, even with the recent string of four weeks straight of declines. However, under the surface, there is a clear deterioration of the recent technology leaders.

Leading technology stocks are starting to fall below their 50-day moving averages, led by the largest market capitalization equities.

Here are the charts of the FAANG stocks, NVIDIA, Tesla, Microsoft, and Salesforce.com, which recently replaced Exxon Mobil (XOM) in the Dow Jones Industrial Average (DIA). 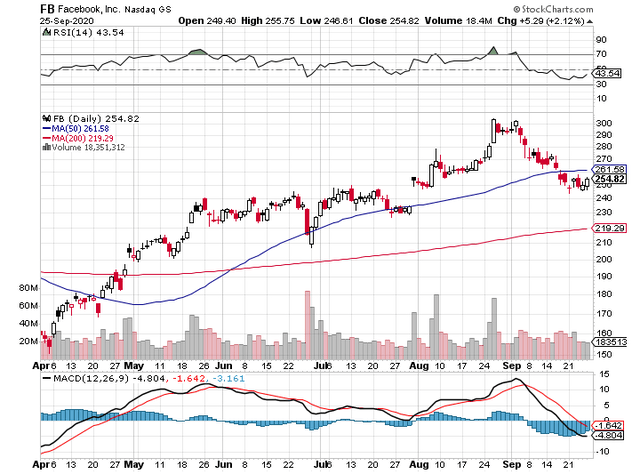 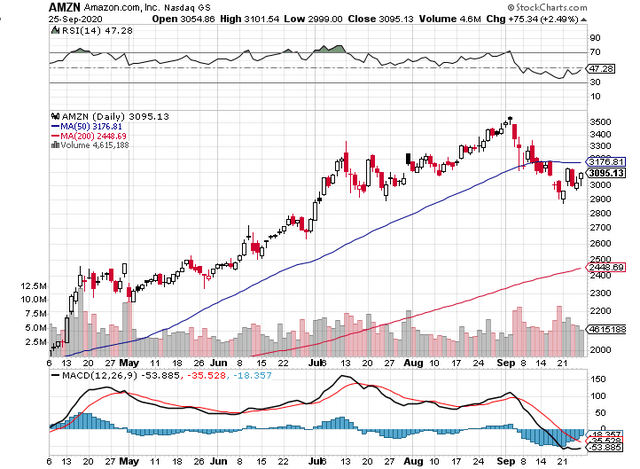 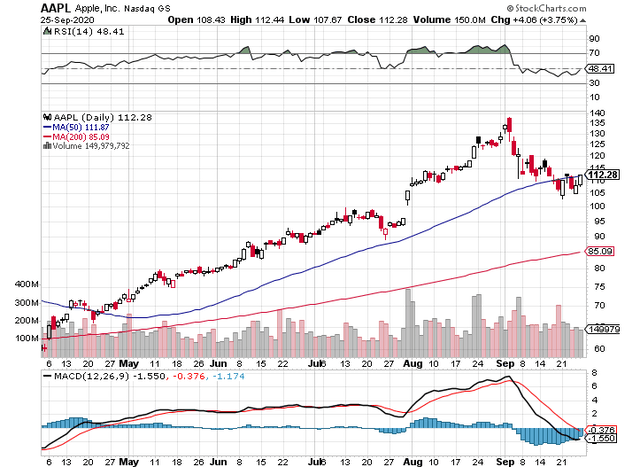 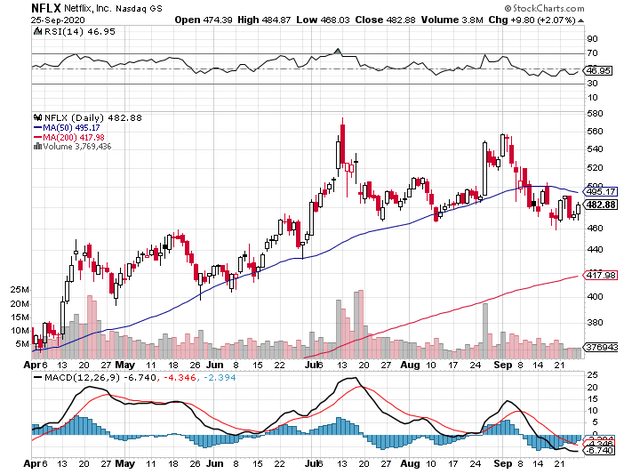 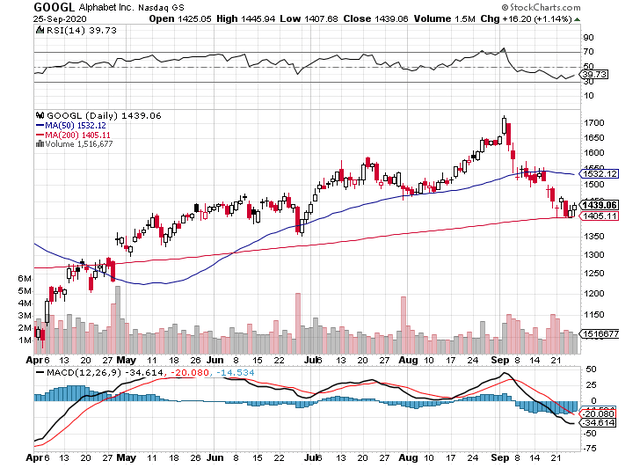 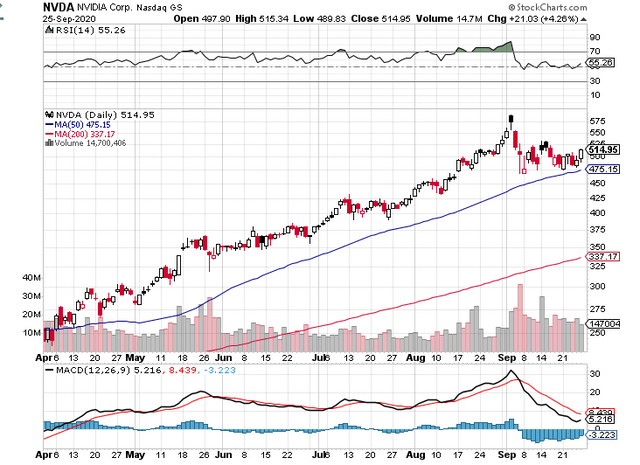 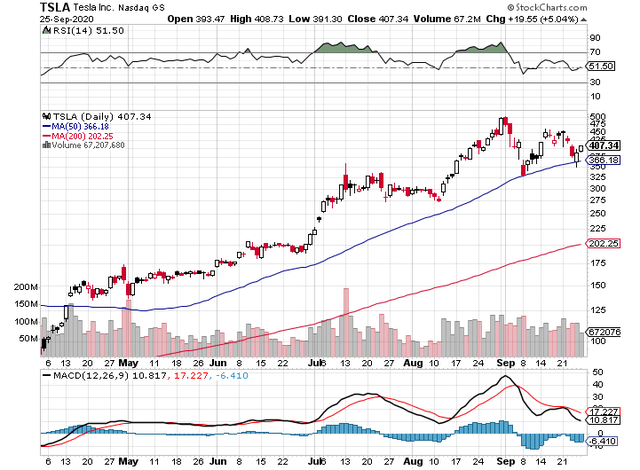 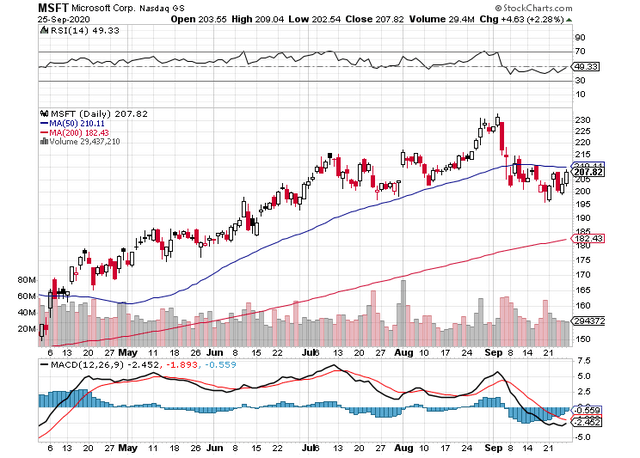 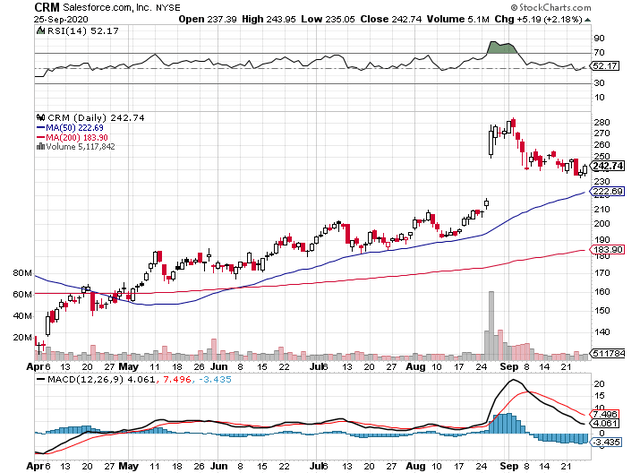 Notably, the largest market capitalization stocks, specifically Apple, Microsoft, Amazon, Alphabet, Facebook are leading the declines, with these aforementioned stocks down 18.6%, 10.8%, 12.9%, 16.6% and 16.4%, respectively, from their recent highs. In fact, only Apple shares closed above their 50-day moving average at Friday's close, and this was only by a whisker, and really reflected how far the mania in the iPhone maker's shares had gone.

For reference, here are the percentage weightings of the SPDR S&P 500 ETF and the Invesco QQQ Trust, which are both trading below their respective 50-day moving averages too, provided by the State Street (STT) and Invesco fact sheets. 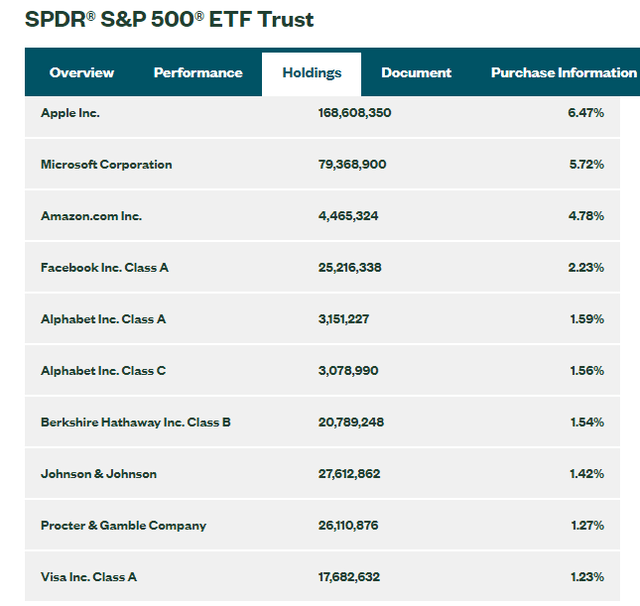 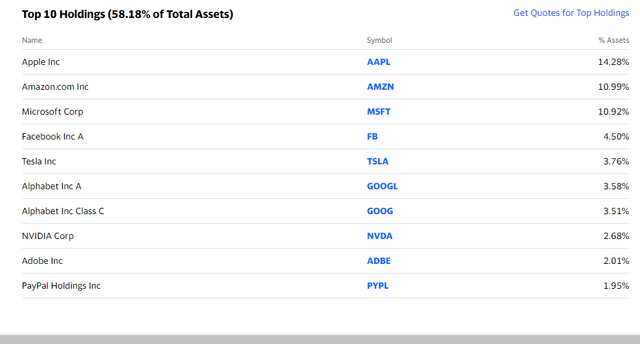 Clearly, the FAANG stocks dominate the weightings of these nameplate indices, and correspondingly, they are feeling the brunt of investor outflows, including outright sustained passive outflows for the first time in a very long time.

Here is a quote directly from James Seyffart on his Twitter (TWTR) thread on this topic, with the emphasis added my own.

We've never had more than one consecutive month of outflows for passive equity funds (Mutual funds & ETFs) in our data but we have five months here -- April to August. Lot of reasons for this but we think one may be a potentially longer term structural shift.

This is something that market participants have to be cognizant of, because the market is particularly vulnerable to a shift in investor behavior, as passive fund flows have been the engine that has kept the market climbing to ever higher valuation peaks.

If passive fund flows would shift to outflows on a sustained basis, imagine what that would mean for the largest market capitalization equities.

For active, contrarian value investors, the past decade has been a nightmare, as price-insensitive and valuation-insensitive passive fund flows have pushed price discovery to the side, and simply buying the largest capitalization stocks with the strongest revenue growth, while ignoring valuation, has been the ideal investment strategy.

Liquidity flows from a growing stream of buy-and-hold passive investors have been amplified by the shift of almost every retirement plan in the country to passive investment strategies, creating what is an everything bubble that now supersedes what we saw in late 1999/early 2000 telecom and technology led stock market bubble. 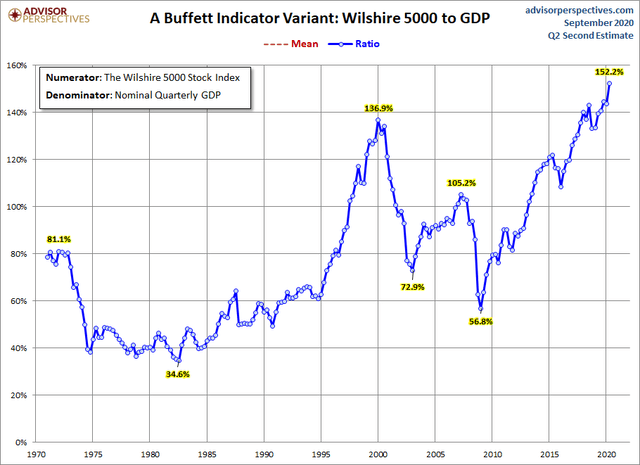 Given this backdrop, GMO's 7-Year Annual Real Return Forecast is as low as I have ever seen it, showcasing how bad of a starting point today's market is for general equity and bond investors.

Look at the table above for a minute, and think about what it means for long-term investors, even if there is a run to new highs after the current elevated fears dissipate, though this is not a given as we are already seeing passive fund outflows that could accelerate if buying the dip falters. Focusing on the poor long-term return prospects, specifically U.S. large-cap stocks, which are projected by GMO to deliver negative 6.5% real returns on an annual basis for the next seven years, show what a conundrum long-term investors face today. In nominal terms, this could be a loss of 4.5% annually, if inflation averaged 2.0% per year (and GMO's return expectations come true), with the Fed now outwardly encouraging inflation to exceed this 2% threshold.

Given this gloomy real return forecast, what can investors do?

The answer is that investors have to look for undervalued assets that are not correlated with the broader market, and there is really only one major asset class that is the answer here, which is of course commodities, which are both historically undervalued, and historically non-correlated, to the broader stock and bond market. 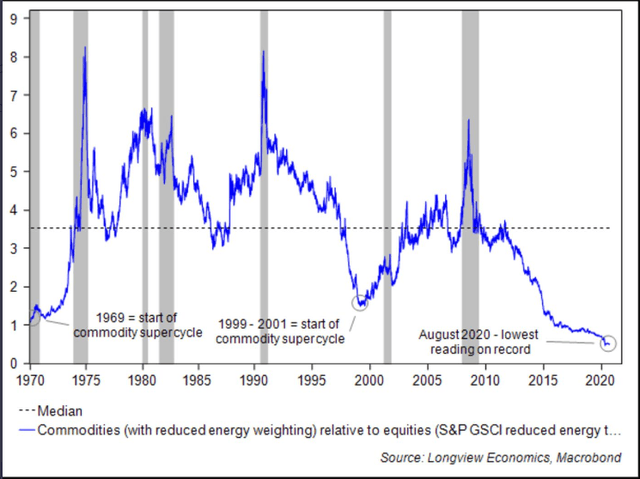 Personally, I have my favorites in the commodity space, which is an out-of-favor asset class I have been studying in depth for nearly a decade now (paying a significant price for being too early), with an unusual level of focus on what I think are the most opportune sectors. Bigger picture, I encourage all investors to look long and hard at their asset allocations given today's almost universally elevated valuation levels in the traditional asset classes, namely U.S. equities and bonds of almost all stripes.