5 Stocks to Buy With Great Charts

When it comes to investing, everything matters. The fundamentals matter. The stock needs to be undervalued or fairly valued relative to its long-term growth prospects. The optics matter. There needs to be a reason why investors will want to buy the stock for the foreseeable future. And, yes, the technicals matter. The chart needs to support the bull thesis.

In this gallery, we will focus on the last of those three characteristics. Specifically, we will be looking at five stocks that have great charts.

Without further ado, then, let’s take a look at five stocks to buy with great charts — and strong fundamentals and optics, too. 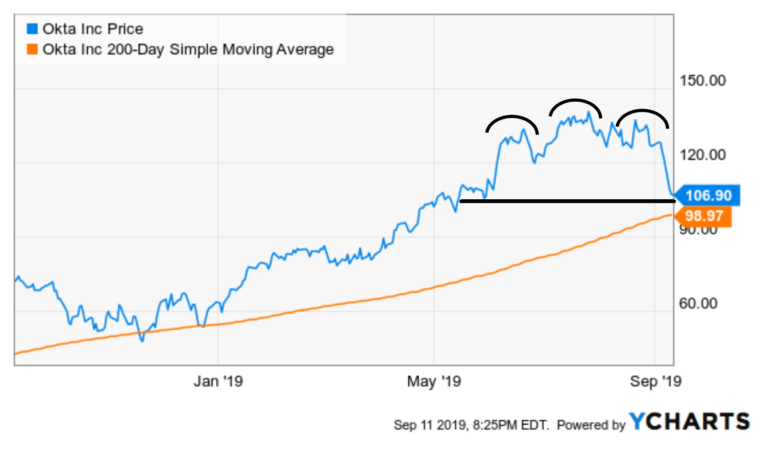 First up, we have a momentum cloud stock, Okta (NASDAQ:OKTA), which was killed amid the massive September shift from momentum stocks to cloud stocks. And its fundamentals, optics and technicals all say it should bounce back in a big way soon.

The technical picture implies that the worst of the recent OKTA selloff is over, meaning the coast is clear to buy the dip.

On the fundamentals side, Okta is a big growth cloud security company. It has been, still is and will remain a big growth company with big margins, supported by secular tailwinds in cloud, cybersecurity and the internet of things. Nothing about this secular growth narrative has changed over the past few weeks. As such, the fundamentals remain robust here and support further upside in OKTA stock.

On the optics side, the momentum-to-value shift which materialized in September won’t last forever. History says it will end, and soon. When it does, the optic backdrop will improve and provide support for a rebound in OKTA stock. 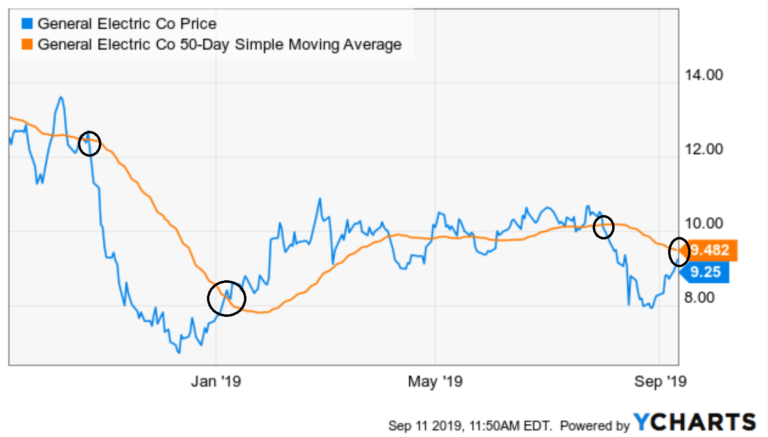 Next up, we have a beaten up industrial giant, General Electric (NYSE:GE). GE’s fundamentals, optics and technicals all imply it could be on the verge of a meaningful breakout.

On the fundamentals side, GE’s depressed fundamentals are starting to improve. This breaks down into three things. First, the global economy appears to be stabilizing, and that should provide an upward lift for economically sensitive stocks like GE. Second, GE continues to simplify its operations with asset sales and business divestitures — moves which create more visibility towards sustained profitability in the long run. Third, GE also continues to reduce its debt load, which ultimately reduces operational risk in the long run and should result in continued multiple expansion for the stock.

When it comes to the optics, those look good, too. GE is a very economically sensitive stock. No one wants to buy this stock when the economy appears to be decelerating. But, signs are starting to emerge that the global economy is actually improving, and there’s a fresh wave of European Central Bank and U.S. Federal Reserve stimuli on the way which should help improve things even further. As such, over the next few months, the global economic outlook should improve.

In response, investors will buy into beaten up, economically sensitive stocks like GE. 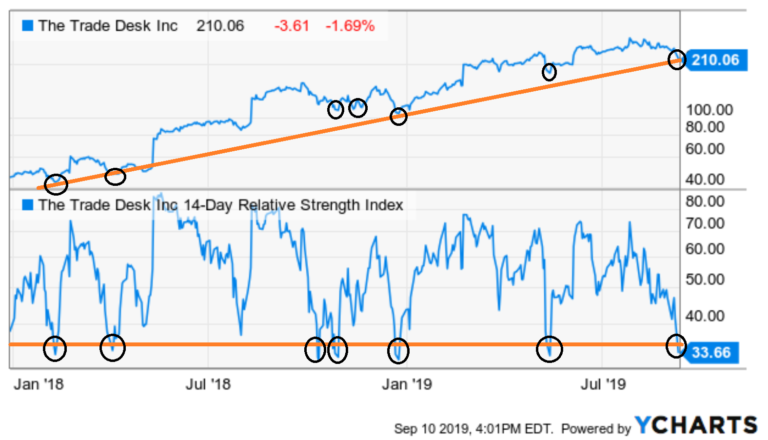 Much like Okta, programmatic advertising leader The Trade Desk (NASDAQ:TTD) is a momentum growth stock which: 1) was damaged meaningfully in the recent pivot out of momentum stocks, and 2) looks ready to rebound in an equally meaningful way.

The chart here looks compelling. Since January 2018, TTD stock has formed a solid uptrend. Amid this uptrend, the stock has dropped into technically oversold territory (as defined by a Relative Strength Index reading below 35) only a few times. Each time, TTD stock bounced back from those oversold conditions over the subsequent few weeks to months. Right now, TTD stock finds itself in similar oversold territory. History says what comes next is a sizable rebound rally.

It helps that the fundamentals for TTD stock remain very robust. This company is a leader in the field of programmatic advertising, which automates the ad transaction process using data and algorithms. This is a secular growth industry supported by the fact that all processes across the globe are becoming data-driven, automated processes. Nothing about this favorable secular growth narrative has changed recently. Indeed, the last thing we heard from the company was a double-beat-and-raise second-quarter print that showed continued robust revenue growth, margin expansion and profit growth.

When it comes to the optics with TTD stock, investor demand should return soon. As mentioned with Okta stock, history says that significant momentum-to-value shifts don’t last very long, and when they come to a close, they ultimately result in a big rally for momentum stocks. I don’t see this time being any different. As such, current weakness in TTD stock should end with a significant rebound rally. 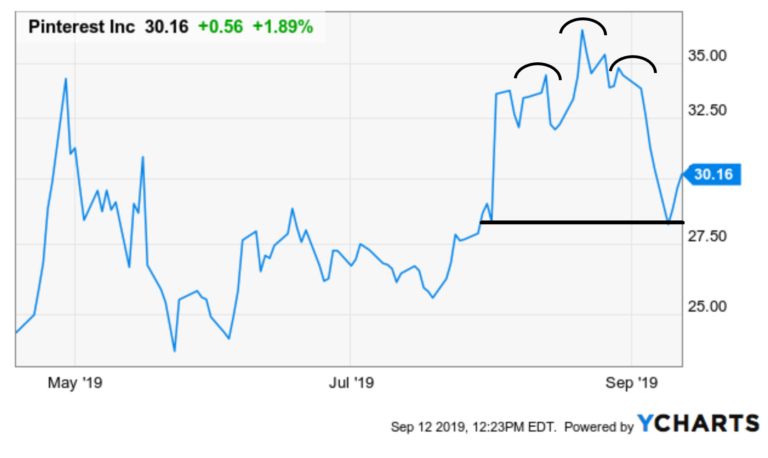 Next up, we have yet another momentum growth stock, Pinterest (NYSE:PINS). PINS has all the necessary ingredients to stage a meaningful rebound here and now.

On the fundamentals side of things, PINS stock remains supported by favorable growth fundamentals. Pinterest is a unique social media platform with hundreds of millions of users. Those users don’t go to Pinterest for the same reasons they go to Facebook (NASDAQ:FB) or Twitter (NYSE:TWTR). They go to Pinterest for visual discovery and inspiration — two use cases which lend themselves particularly well to ads. As such, Pinterest should have no problem over the next several years building out its ad business. Thus, PINS stock will be supported by robust revenue and profit growth — the sum of which should keep PINS stock on a long-term winning trajectory.

On the optics side of things, PINS stock should benefit from the fact that its last earnings report was very, very good. Over the next weeks, investors will look for opportunity in the momentum rubble by identifying stocks which most recently had strong momentum. Pinterest had that. Last quarter, the numbers were so good that PINS stock rallied 20% to all-time highs. 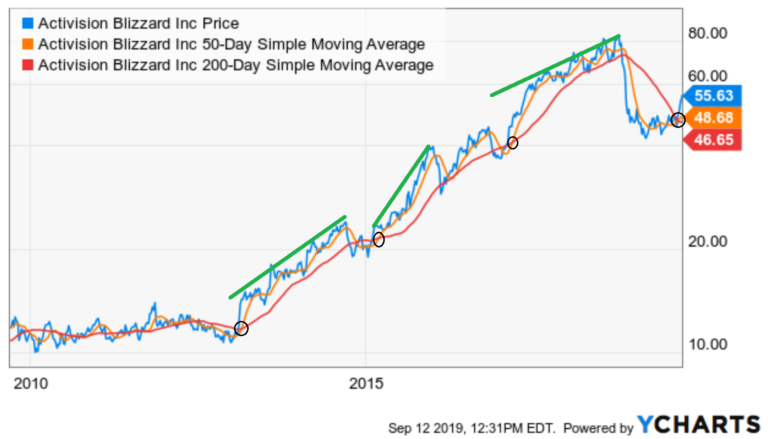 Last, but not least, we have video game publisher Activision Blizzard (NASDAQ:ATVI). ATVI stock seems fundamentally, technically and optically positioned for a big breakout rally over the next 12 months.

2020 could be a big year for Activision. Next-generation video game consoles from Sony’s (NYSE:SNY) PlayStation and Microsoft’s (NASDAQ:MSFT) Xbox are launching next year, marking the first console refresh cycle in seven years. More than that, these next-gen video game consoles will have cloud gaming capabilities — yet another huge advance in the video game industry. Also, Activision’s game lineup for 2020 should be stellar.

On the optics side, you have a long-term winning stock that went through a rough patch in 2018-2019. Now, the stock appears to be bouncing back from that rough patch. Importantly, it’s bouncing back ahead of what is shaping up to be a big 2020. That’s a pretty compelling rebound story. Thus, I think buying action in ATVI stock should outweigh selling action for the foreseeable future.