The Dow Jones Industrial Average continues to fall away from its recent push towards the 27,000 level. Investors were taking a pause or looking for stocks to sell after Friday’s strong job numbers called into question the likelihood of multiple Federal Reserve rate cuts this year. We will know more when Fed chairman Jerome Powell gives his semi-annual testimony to Congress starting on Wednesday.

Wall Street is also waiting for actual progress on the renewed U.S.-China trade talks, as well as indications that the troubles at Deutsche Bank (NYSE:DB) aren’t signs of more systematic problems over in the Eurozone. In response, a number of mega-cap stocks are rolling over and look headed for further losses. Here are four stocks to sell or avoid: 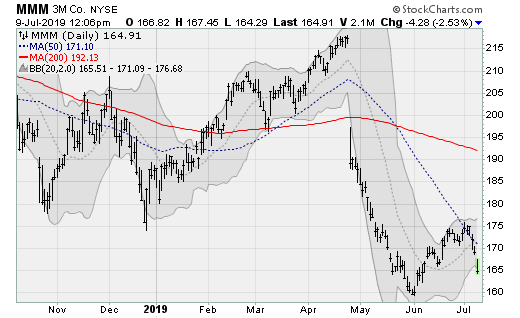 3M (NYSE:MMM) shares are dropping hard and fast away from their 50-day moving average, closing back in on its late May lows in the wake of a downgrade from analysts at RBC Capital Markets — echoing an earnings warning from German chemical maker BASF. The company is highly attuned to industrial activity globally, which is slowing.

The company will next report results on July 25 before the bell. Analysts are looking for earnings of $2.10 per share on revenues of $8.1 billion. When the company last reported on April 25, earnings of $2.23 missed estimates by 27 cents on a 5% decline in revenues. 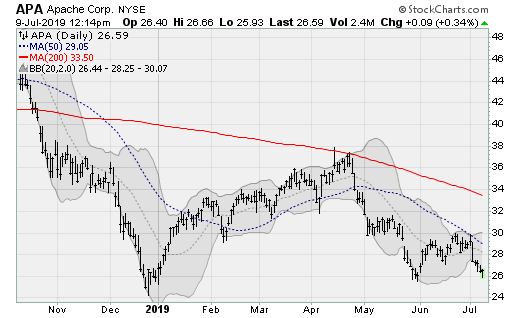 With energy prices drifting lower, Apache (NYSE:APA) is retesting its late May lows and looks set for a drop back to its late December lows near $24, which would be worth a loss of nearly 8% from here. The tensions in the Persian Gulf with Iran and a recommitment by OPEC+ to keep production low haven’t been able to push energy prices back up — weighing on the entire energy sector. 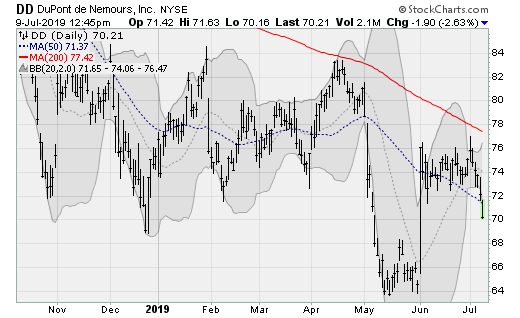 Shares of DuPont (NYSE:DD) are cutting back below their 50-day moving average, heading for a return to their May lows, which would be worth a loss of roughly 10% from here. This continues a downtrend that has been in play since January 2018, capping a loss of more than 30% overall. 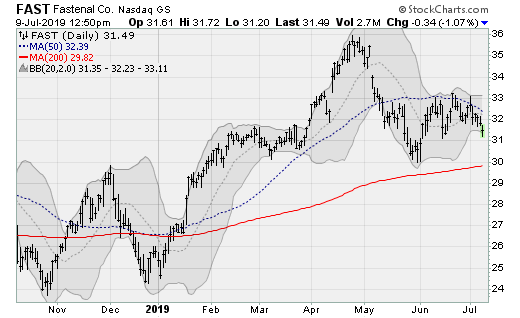 Shares of Fastenal (NASDAQ:FAST), which are directly tied to industrial activity via its sales of screws and other fasteners, is breaking down out of a three-month consolidation range in what looks like a return to its May lows. This comes as the 50-day moving average proves to be intractable resistance. A violation of the 200-day moving average would set up a fall all the way back to its December low.