4 Stocks to Buy That Are Surging After Earnings

Wall Street was agog at big earnings out of the technology sector on Friday morning, with Google parent Alphabet (NASDAQ:GOOGL,NASDAQ:GOOG) posting its largest opening surge in years in the wake of solid earnings numbers. Alphabet isn’t alone, however, with a number of popular stocks to buy pushing higher thanks to better-than-expected quarterly results.

We are getting into the heart of the Q2 earnings season. As of Friday, just 16% of the S&P 500 had reported results. The numbers have been difficult, given the ongoing trade dispute with China and some unevenness to the economic data in recent months. Through last week, the S&P 500 was on track for a 1.9% decline in profits vs. last year. If the decline holds through to the end, it would mark the first back-to-back decline in earnings since the energy-driven earnings recession of 2016.

But if today’s surge in positive earnings reporters is any indication, that number is likely to push back into positive territory though. Here are four stocks to buy after earnings:

Alphabet shares are up more than 8.5% after earnings, returning to the highs last seen in late April and extending a now 20% rally off of its early June low. The company reported earnings of $14.21 per share on Thursday night, $2.83 better than expected on a 19.3% rise in revenues. Moreover, management announced a $25 billion share repurchase program. 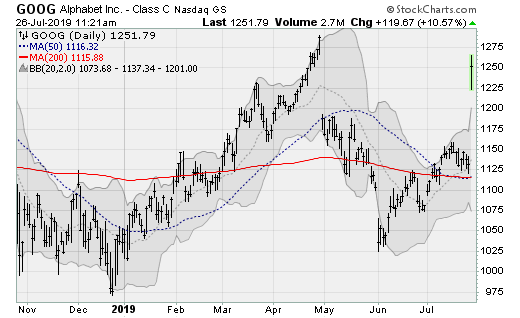 Highlights included the ongoing strength of its YouTube business as well as cloud. UBS analysts noted that the report checked all the boxes and that long-term growth drivers were solidly intact. They are looking at a $1,425 price target for GOOGL stock.

Starbucks (NASDAQ:SBUX) surged nearly 9% after earnings, surging to new record highs, further extending a rise of more than 100% off of the lows set in the summer of 2018 as the stock exited a consolidation range going back to 2015. Investors are revved up — caffeinated, maybe? — thanks to better-than-expected results. 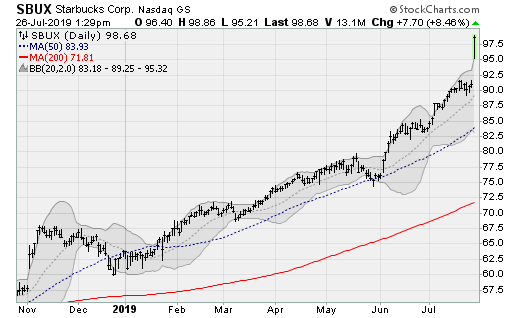 Earnings of 78 cents per share beat estimates by five cents on an 8.1% rise in revenues to $6.8 billion. Global comp-store sales increased 6% driven by a 3% increase in average ticket prices. The company will next report results on October 24 after the close. Analysts at Telsey Advisory Group raised their price target and were encouraged by the company’s improving earnings growth trends.

Intel (NASDAQ:INTC) shares tested into the gap created from its April decline on Friday thanks to solid numbers: The company reported earnings of $1.06 per share vs. expectations of 90 cents on revenues of $16.5 billion. Forward guidance was strong and the company announced a deal to sell its smartphone modem business to Apple (NASDAQ:AAPL) for $1 billion. 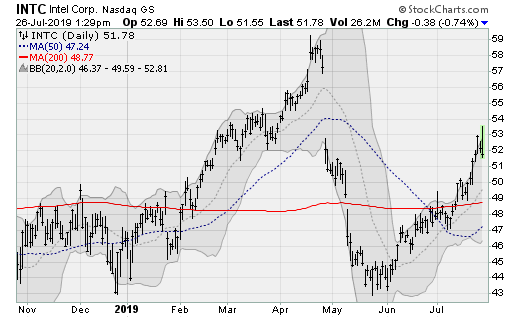 Intel will next report results on October 24. Oppenheimer analyst Richard Schafer maintained his Perform rating on the company highlighting the sale of the modem business as removing an earnings drag going forward.

McDonald’s (NYSE:MCD) shares blasted to a new record high on Friday, further extending a 40%+ rally off of the lows set last summer, thanks to the reporting of solid results before the bell. Earnings of $2.05 per share matched estimates despite a slight drop in revenues. Global comp-store sales increased 6.5%, above the 5% expected, thanks to good results across all segments and traction for its 2 for $5 deal in the United States. 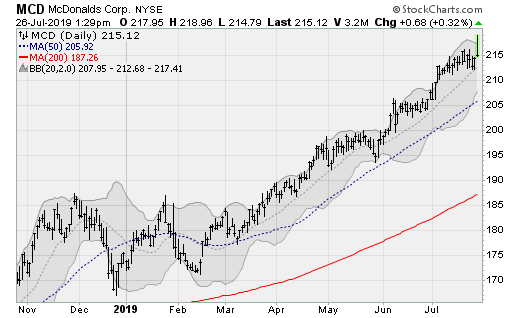 The U.S. results were also helped by recent restaurant renovations, with 60% of locations having been updated recently. New innovations like self-ordering kiosks are driving traffic. The results stand in contrast to the disappointment setting in elsewhere in the restaurant industry.