The meme stock rally has taken off in recent weeks. Shares of END_OF_DOCUMENT_TOKEN_TO_BE_REPLACED

Thanks to escalating trade tensions, the market had one of its worst weeks of 2019 so far last week. The S&P 500 was down just over two percent on the week and the Nasdaq fell three percent.

Equities are still within shouting distance of their all-time highs, but investor confidence was shaken somewhat this week as it appears we are on to the next round of tariffs unless some sort of breakthrough with trade talks happens in short order.

So which stocks are insiders stepping up to the plate and purchasing? Here are four names seeing significant and recent insider buying.

Let's start with NCI Building Systems (NCS). The stock has seen some hard times of late and is trading near all-time lows. 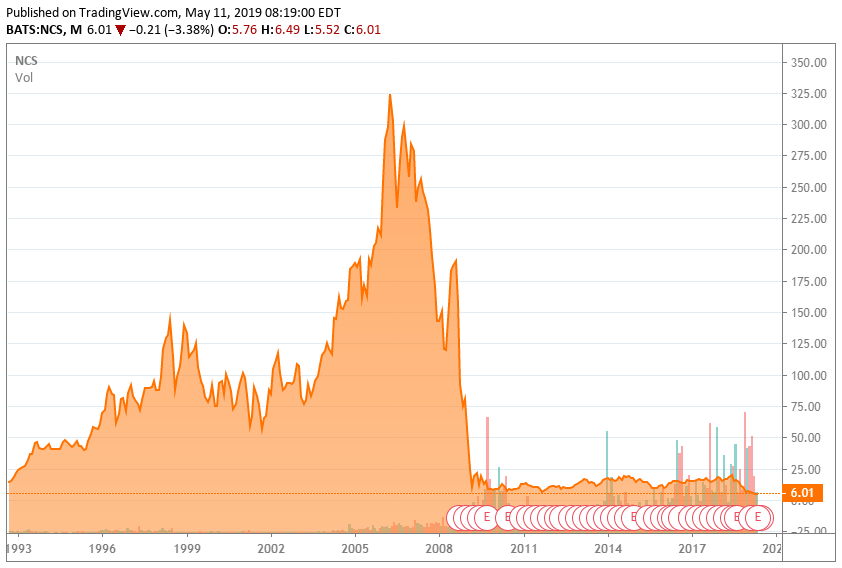 The company reported Q1 results on May 8th. Revenues were slightly better than expected, but bottom line numbers did not come close to meeting expectations for this designer and manufacturer of metal products for the nonresidential construction industry.

The decline in the stock has prompted the CEO to add $500,000 to his core holdings on May 10th. Two other directors made smaller buys in February and March. This stock seems universally hated by the analyst community so far in 2019. Four Holds or Sells have been issued by the likes of UBS and Citigroup with no Buy ratings I can find in 2019.

Despite a market cap of approximately $750 million, there is little on this name. There was a bullish article on this stock in mid-January here on Seeking Alpha, an optimistic thesis that has not borne fruit so far in the year. However, that is the only piece on NCS so far this year on this site. Based on the recent purchase, the CEO appears to be signaling the shares may be undervalued from a longer-term basis. 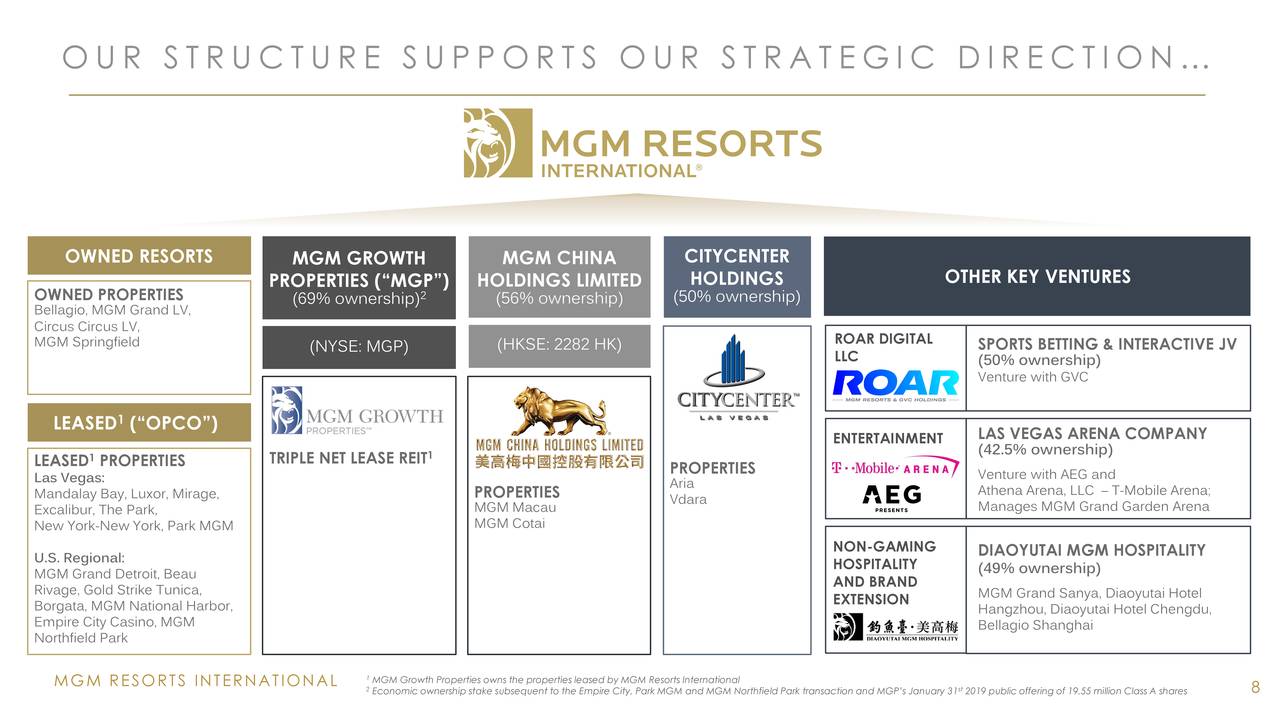 Next up is MGM Resorts International (MGM) which owns nearly 30 hotels/casinos primarily in Las Vegas and Macau. The company reported Q1 results a day before NCI Building Systems. Much like NCI, it also posted a slight beat on revenues while falling short in the earnings department. 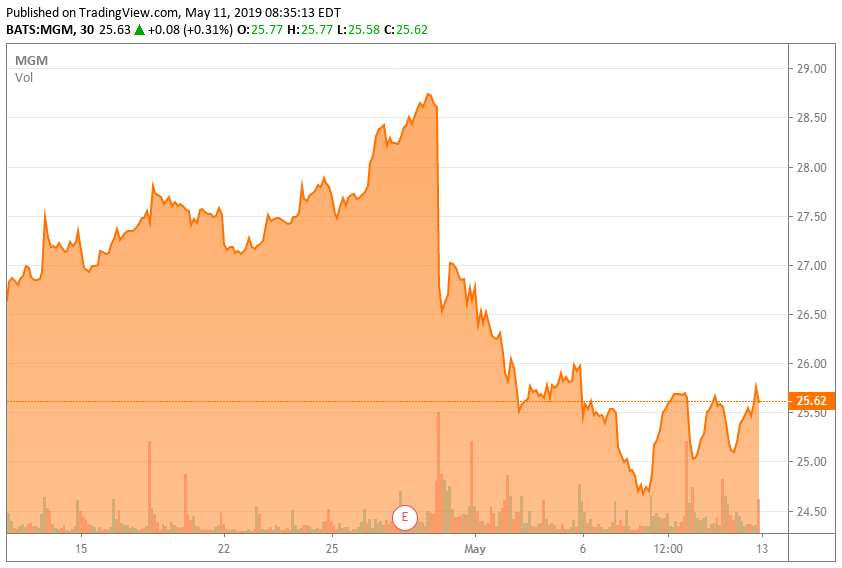 The stock was under some pressure to its earnings release (highlights below) thanks partly to worries about what escalating trade tensions could have on its business in Macau, a gambling enclave that posted weaker than expected revenues in April. 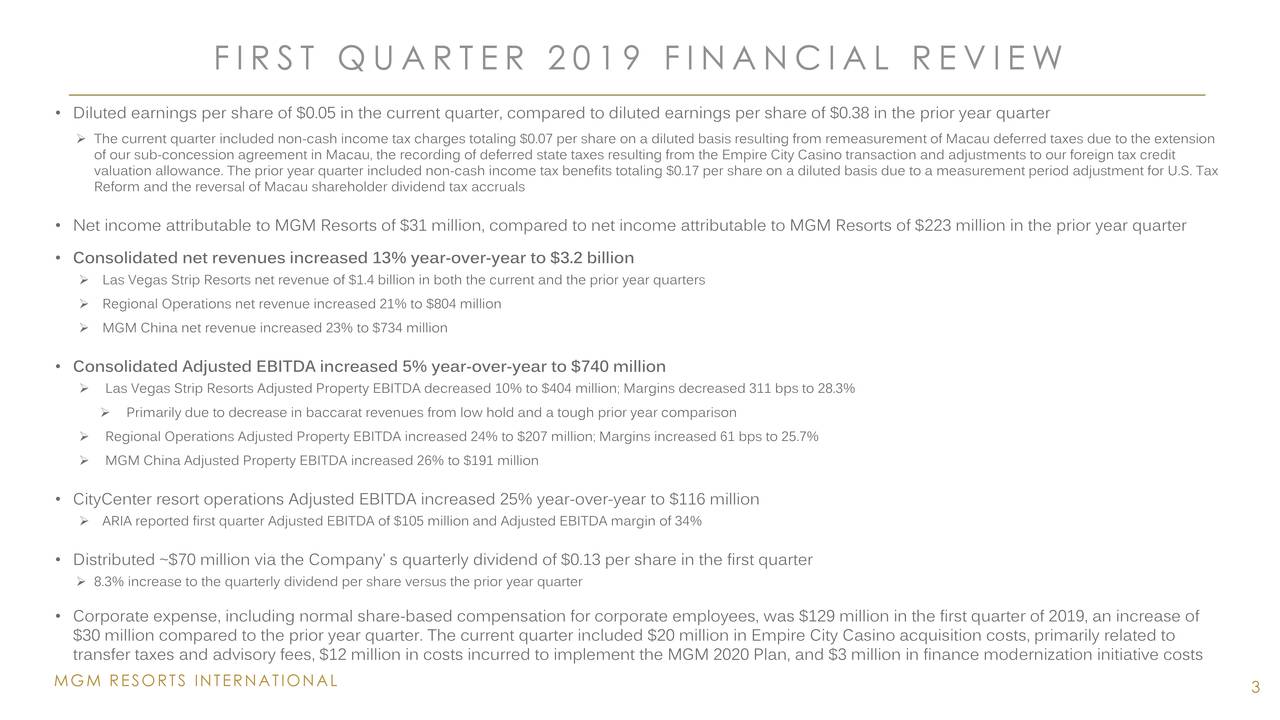 A director must believe MGM is a good value here as he bought just over $20 million in new shares on May 10th. This follows much smaller buys from two other directors in March. The company did report better EBITDA than expected in the first quarter and raised its dividend payout a big more than eight percent as well. The shares now yield right at two percent. The stock has become a battleground stock since its earnings release with two Holds (UBS, Deutsche Bank) and two Buy (JPMorgan, Jefferies) ratings reissued since the company reported quarterly results. 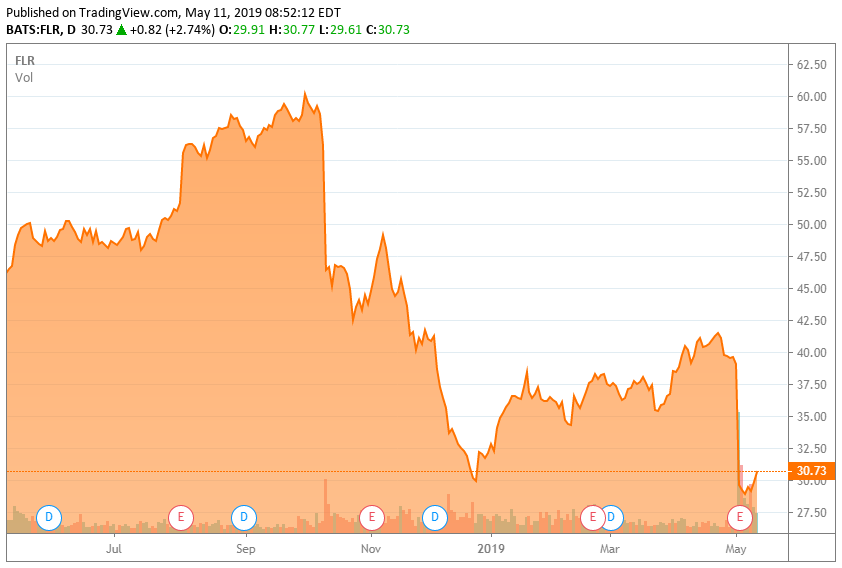 Finally, we have Fluor (FLR). As can be seen above, the shares of the well-known engineering giant have been under considerable pressure in recent months. The stock was crushed during the market sell-off during the fourth quarter of last year. 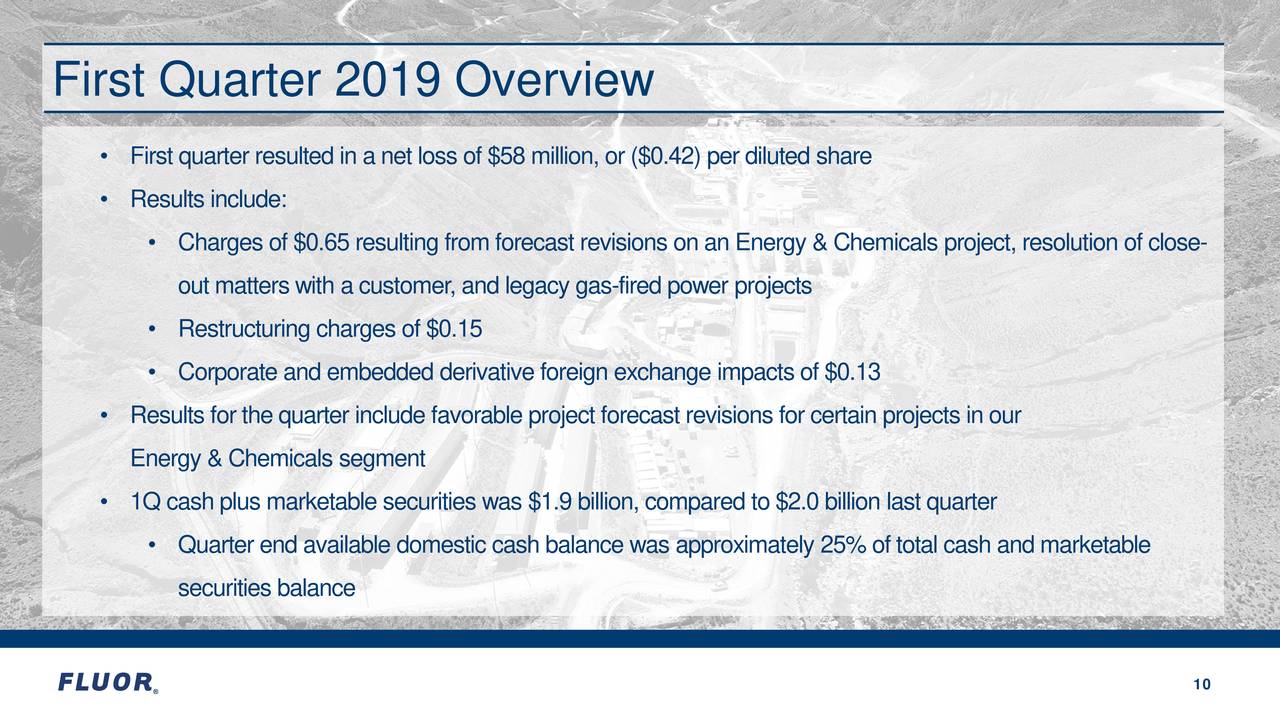 The shares had rebounded in 2019 until the company badly missed both top and bottom line expectations within its first quarter report that was disclosed to start May. Not only did the company miss revenue and earnings expectations but announced its CEO would be leaving and lowered forward guidance as well.

In addition, escalating trade tensions are certainly helping the company given the global nature of its business. Goldman Sachs also downgraded the shares on May 7th. Deutsche Bank and D.A. Davidson reissued their Hold ratings after Q1 results as well. The one analyst outlier seems to be UBS which reiterated its Buy rating and $62 price target on Thursday. 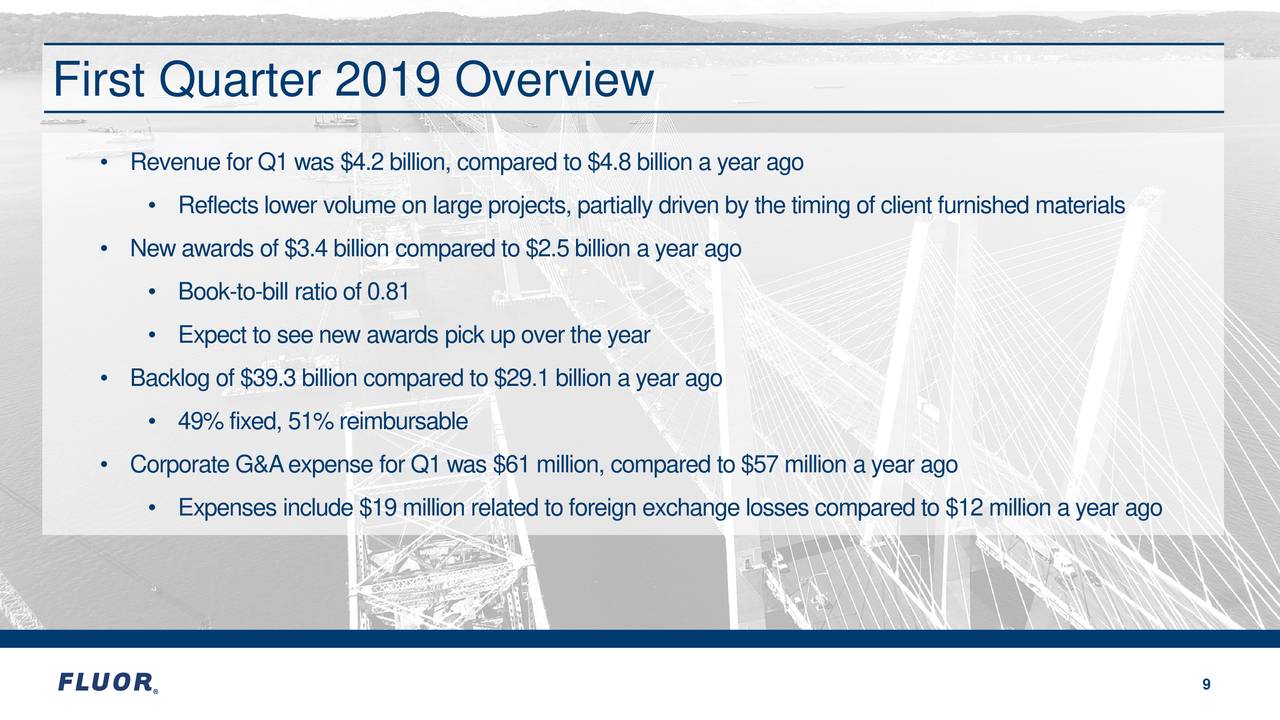 The first quarter did have a few positives, some of which are contained in the chart above. The plunge in the stock this month caused the Executive Chairman to increase his holdings just over $475,000 on May 9th which is the first insider buying of 2019. Nice to see someone besides UBS positive on the stock after the shares have lost 50% of their value over the proceeding nine months.

Finally, UnitedHealth (UNH) sees the first insider buys I can find in the stock since 2013. First, a director bought approximately $1.5 million in new shares on May 1st. Two days later, the company's CEO added just over $4.6 million to his holdings. 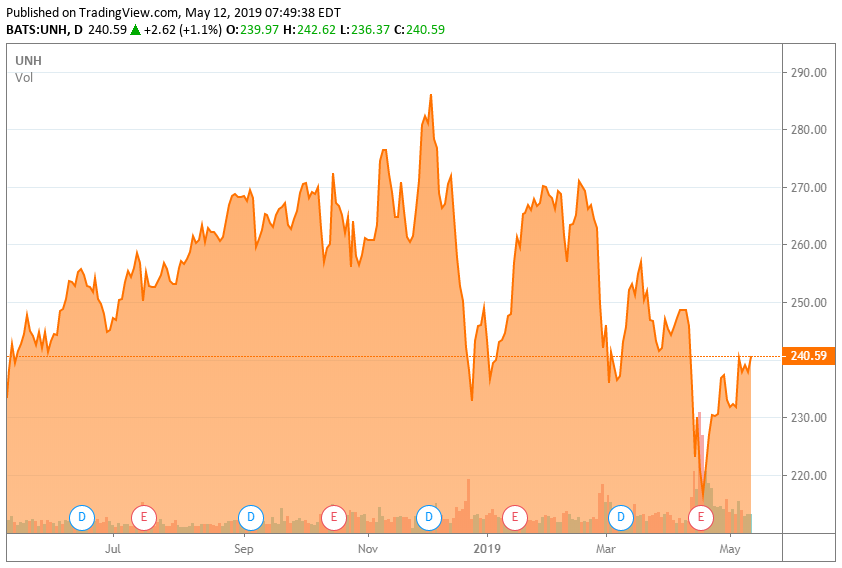 The stock is currently halfway between its 52-week high and 52-week low. The equity is down a little over 10% so far here in the second quarter of the year.

The sector has been under pressure as the 2020 election season is upon us. Calls for 'Medicare for All' and other ways to provide universal coverage by many of the approximately 20 people running for the Democratic nomination have spooked investors.

Based on these purchases, insiders seem to believe these efforts will come to naught and/or have little effect on their business. There doesn't seem like there is much wrong with the current state of the business judging from Q1 results posted in mid-May where the company easily beat both top and bottom line expectations.

And those are four notable names seeing recent and significant insider buying to contemplate.