U.S. equities are under pressure on Tuesday as the latest round of U.S.-China trade talks look set to end in acrimony. The Trump Administration is reportedly preparing to restrict capital into China by potentially limiting U.S. pension investment in Chinese equities. If so, this is a big escalation of the situation and will surely invite a similar response from Beijing.

As a result, the Dow Jones Industrial Average is falling back below its 50-day moving average, setting up another retest of its 200-day average. A breakdown would risk a test of the June lows which must hold to avoid a potential drop all the way back to January lows.

With prices weakening, here are four components that are leading the way down: 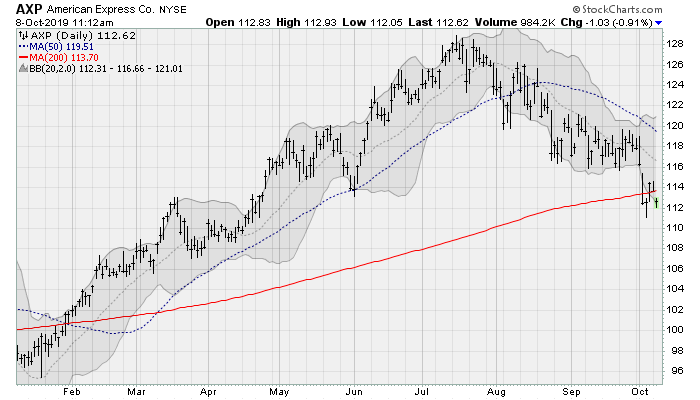 Shares of American Express (NYSE:AXP) are dropping below their 200-day moving average and look headed for a test of the January lows which would be worth a loss of roughly 10% from here. This comes despite the recent announcement of a 120 million share repurchase program and a 10% increase to the quarterly dividend.

The company will next report results on Oct. 18 before the bell. Analysts are looking for earnings of $2.03 per share on revenues of nearly $11 billion. 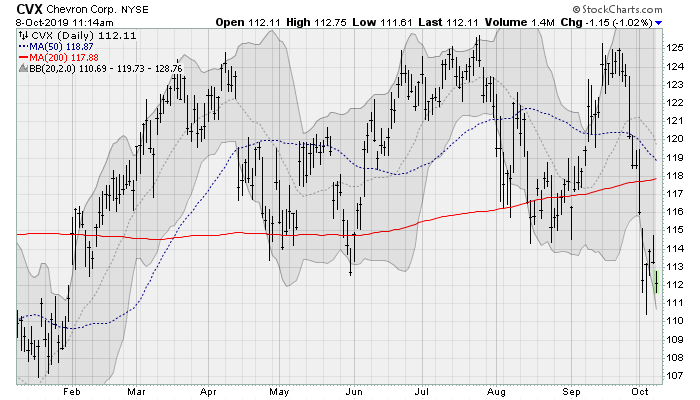 Chevron (NYSE:CVX) shares are threatening to break to lows not seen since January, already well below their 200-day moving average and down more than 10% from the triple-top resistance near $125. Despite ongoing tensions in the Middle East, with Turkey pushing into northern Syria, crude oil prices are plumbing year-to-date lows.

The company will next report results on Nov. 1 before the bell. Analysts are looking for earnings of $1.86 per share on revenues of $40.7 billion. 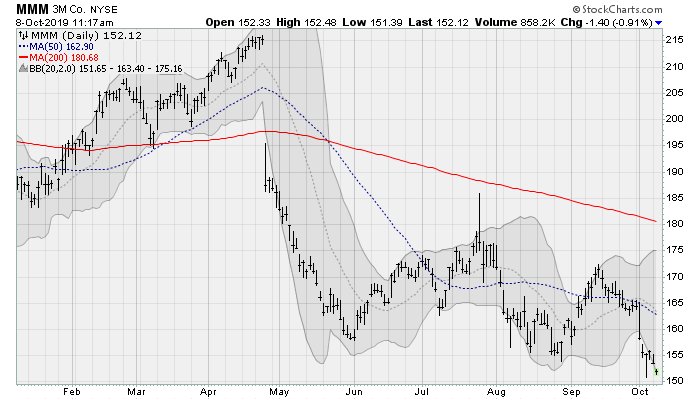 Shares of 3M (NYSE:MMM), which are closely tied with the economic cycle just as industrial activity rolls over badly, has fallen below double-bottom support to return to levels not seen since the summer of 2016 — marking a decline of nearly 40% from its highs.

The company will next report results on Oct. 24 before the bell. Analysts are looking for earnings of $2.51 per share on revenues of $8.2 billion. 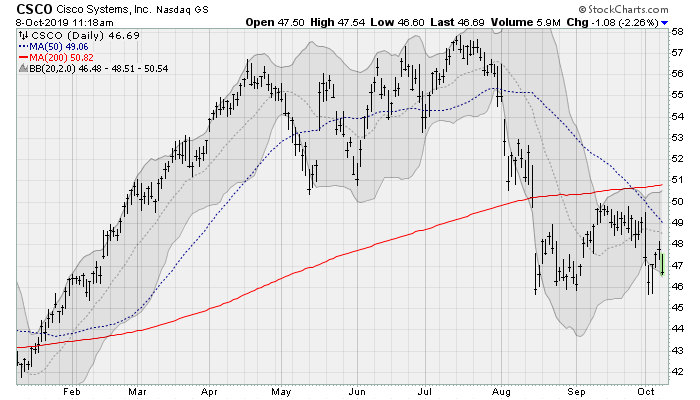 Cisco (NASDAQ:CSCO) shares are testing critical three-month support near the $46-a-share level — below which a decline would likely take prices back to levels not seen since the December low near $40. The company has been at the center of possible trade action surrounding Chinese telecom equipment maker Huawei, but has yet to benefit as the situation remains dynamic.

The company will next report results on Nov. 13 after the close. Analysts are looking for earnings of 81 cents per share on revenues of $13.1 billion.