American consumers are feeling pretty good right now. Consumer confidence has soared back to the highs seen last summer according to the University of Michigan Consumer Sentiment Index. And for good reason: the unemployment rate has rarely been lower, asset prices are up and President Trump is talking about another round of tax cuts.

So there’s plenty for the average shopper to feel good about. As a result, a number of discount retailer stocks are perking up and moving higher, reflecting a growing sense on the Street that a spending turnaround is upon us after the post-holiday slump.

Here are four names worth a closer look. 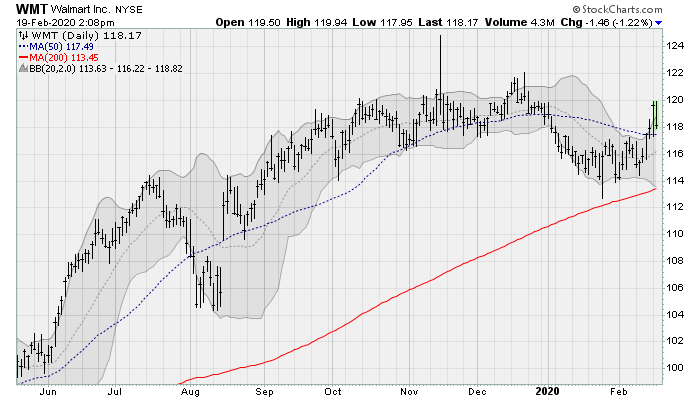 Walmart shares are crossing up and over their 50-day moving average, closing in on the prior high set in December amid a recovery from a test of its 200-day average. This comes despite the reporting of weaker-than-expected Q4 results, breaking a string of seven consecutive quarters of upside surprises. The big highlight was the fact U.S. comp-store sales rose just 1.9%, the first sub-2.0% number in nine quarters.

Why is the stock rallying? People seem to be focusing on the industry-wide headwinds faced during the holiday shopping season, such as the fact there were six fewer days on the calendar.

Also, management raised the quarterly dividend by 2% to 54 cents per share. The new yield is around 1.9%. Investors are betting that the company’s investments in its website and delivery options will help it battle Amazon (NASDAQ:AMZN), which continues to make inroads into the holiday shopping season. 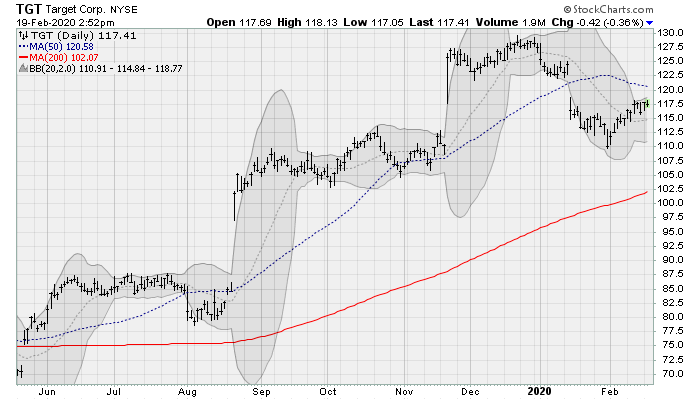 Target shares are rising to challenge resistance from their 50-day moving average, setting up a run at the prior high near $130 set back in December. Like Walmart, Target also recently reported somewhat disappointing results with areas like electronics, toys, and home categories lagging. This was a big letdown from the prior quarter numbers, which crushed estimates and resulted in management raising their full-year outlook.

The pullback helped reset some valuation concerns which in the middle of January, saw the stock trading at a 26% price-to-earnings premium to its five-year average.

Another silver lining is that despite a tepid Q4, the company still bagged its 11th straight quarter of comp-store sales growth. 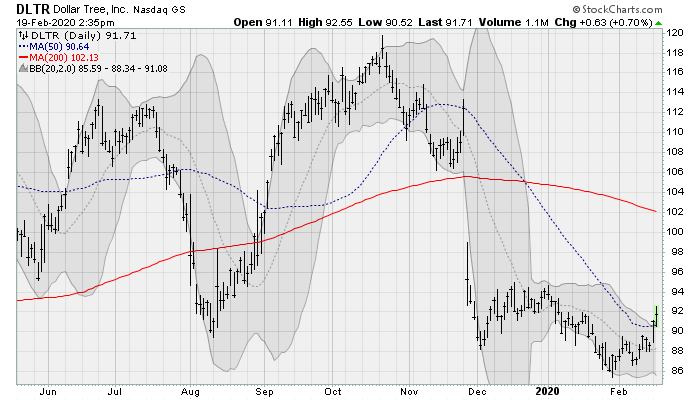 Dollar Tree shares are rising up and off of a three-month consolidation range with a move above its 50-day moving average, setting the stage for a rally to its 200-day average near $102.

Shares were recently downgraded by analysts at Bank of America Merrill Lynch and KeyBanc Capital Markets, but sentiment appears ready for a turnaround as consumers reopen their wallets especially at the lower end of the socio-economic spectrum where recent wage gains have really bolstered purchasing power.

The company reported an earnings miss back in December on worries over import tariffs on Chinese imports. While the company maintains exposure to China amid the COVID virus outbreak, management has been shifting its supply chain away from China and Beijing has also been aggressive about getting its workforce back into factories. 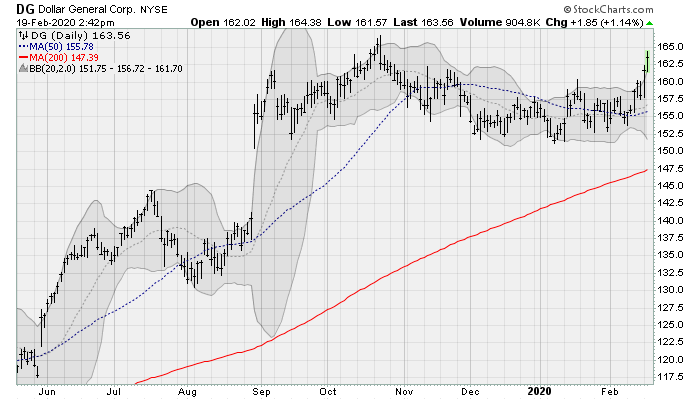 Dollar General shares are rising back to test prior highs set in October, setting the stage for a push to new all-time highs. Analysts at Telsey Advisory Group raised their price target back in December as they remained impressed with a long list of management initiatives and a solid Q3 earnings report. The company enjoyed a nearly  5% rise in same-store sales and issued upside guidance as well.