U.S. equities are continuing their climb on Wednesday ahead of the Independence Day holiday. The themes are familiar: Hope for a trade deal with China, the specter of interest rate cuts from the Federal Reserve, and an ongoing plunge in long-term bond yields making credit cheap again.

The S&P 500 is flirting with the 3,000 level, setting fresh records, as 10 out of 11 sectors post gains. President Donald Trump is clearly paying attention as well, tweeting that the S&P 500 is up 19% for the year and that both China and Europe are manipulating their currency — furthering the idea that we are in a global race to the bottom when it comes to money pumping.

One area of interest for investors amid all this is the auto stocks, which had been left for dead amid reports of sales declines as higher rates earlier in the year dampened buying interest. But with rates falling and inventories high, buyers are being showered with attractive deals. These four stocks are poised to benefit:

Tesla (NASDAQ:TSLA) shares are on the move, pushing up and over their 50-day moving average in a break of a downtrend pattern going back to December. Shares fell as low as $180, marking a loss of more than 50% from the high. The stock is benefiting from the reporting of better-than-expected second-quarter deliveries of 95,200 vs. the 91,000 analysts were expecting. 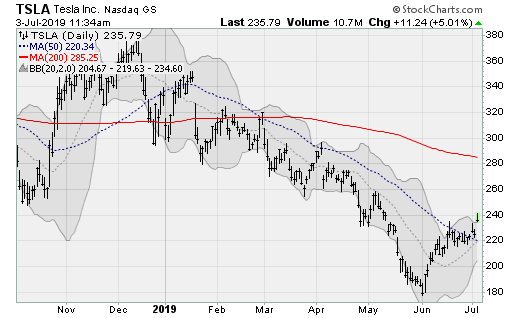 The company will next report results on July 31 after the close. Analysts are looking for a loss of 55 cents per share on revenues of $6.2 billion. When the company last reported on April 24, a loss of $2.90 missed estimates by $1.93 despite a 33.2% rise in revenues.

Ford (NYSE:F) shares are continuing to rise off of support near their 50-day moving average, continuing an uptrend that started in January. The 200-week moving average is being contended with now, a level that killed prior uptrends throughout 2018. Investors are taking heart in the 7% year-over-year growth in truck sales in the second quarter, the best result for that high margin product since 2004. 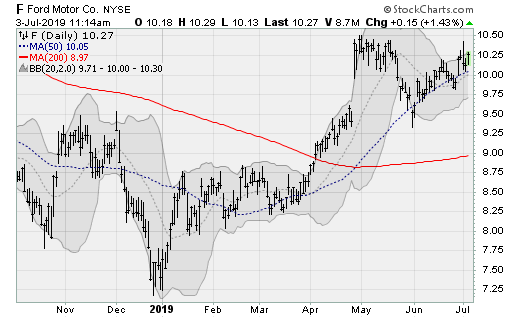 Shares of Toyota Motor (NYSE:TM) are pushing up and out of a nine-month consolidation range to return to levels not seen since the summer of 2018. Watch for a run at the prior high near $134, which would be worth a gain of roughly 6% from here. 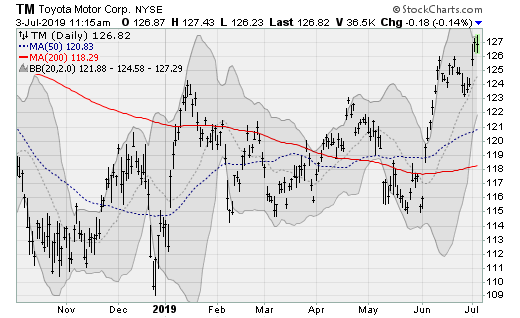 Shares of Fiat Chrysler Automotive (NYSE:FCAU) are rising above their 200-day moving average to test the prior highs set in April and May. The company has been at the center of drama surrounding a possible merger with Renault, with reports management hopes to restart talks after the French government balked. For now, however, the proposal has been withdrawn. The company reported June U.S. sales of 206,083 units, which was a 2% increase from the prior year. Ram pickup sales jumped 56% year-over-year. 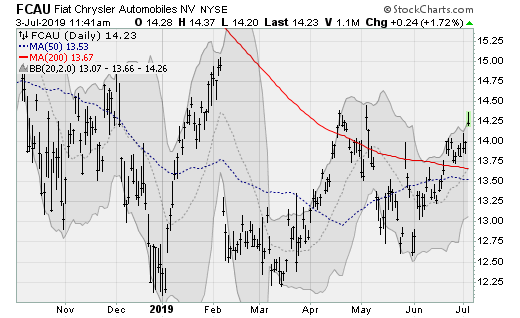