3 Undervalued Stocks That Will Fall Back Into Favor

Wall Street investors are somewhat split this year. Stocks bifurcated into haves and have-nots: some sectors are thriving while other investment theses can’t gain any momentum. Today we’ll consider three undervalued stocks that should eventually return to favor among investors. All three have plenty of potential upside that is currently being overlooked by the markets.

The overall investment environment still favors equity bulls. Despite all the difficulties presented so far in 2020, indices are near all-time highs and the macroeconomic conditions are merely strained at best. Global governments are doing all they can to provide stimulus to restart the world and central banks are doing their fair share of heavy lifting, with great creativity besides. They are testing new ways of providing very loose monetary policy because the situation is dire and warrants it.

Almost all governments have gone to negative yields. The European Central Bank, under the new leadership of Christine Legarde, has even promised to provide negative rate loans, which would have sounded insane just a short while ago.

All this easy money and liquidity makes it very difficult to short stocks. As long as sentiment remains positive this year, stocks will continue to rally. Some names have been discounted by the market, but these 3 undervalued stocks will fall back into favor on Wall Street:

The question remains if the three undervalued stocks we are discussing today will join the frantic upward rally or not. The good news is that all three are mired in mediocrity, so there is literally less possible downside than upside here. 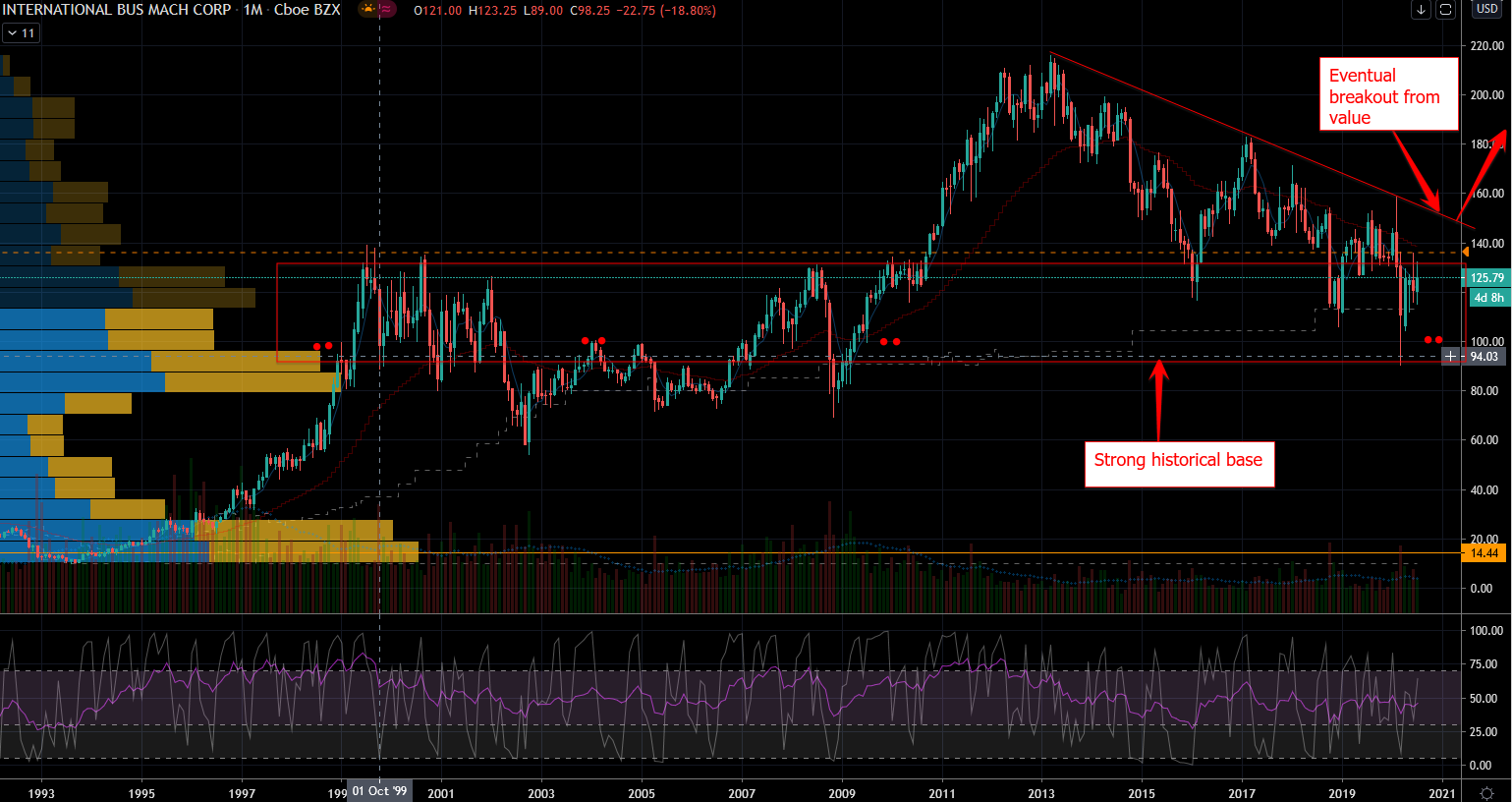 IBM is the poster child for underwhelming management performance. For years the company has seem negative growth yet investors have stuck by the stock. Even Warren Buffett got tired of waiting and gave up on IBM, and he does not do that often.

This year, they finally replaced CEO Ginni Rometti, so the company is now under new management. So far I’m not that impressed because it’s all sounding like more of the same, but I am willing to give the new team more time before I write them off.

IBM stock is languishing -6% this year while the tech-heavy NASDAQ is currently up more than 20%. Clearly investors do not yet believe IBM can turn this ship around, but the idea here is to bet on turnarounds before others see them.

For years IBM made big promises about the impact of artificial intelligence. While the machine performances are amazing, the stock price has not joined the party. At some point they’re going to have to simply join the new tech way of doing business.

Recurring subscriptions is where most sectorcompetitors are and IBM stock will have to go there too. If a giant slug like Microsoft (NASDAQ:MSFT) can do it, so can this one. Investors rewarded MSFT stock for the approach and they will do the same for IBM. The cloud is where it’s at, and new management will be able to take it there. Continuing to do the same thing for this many years is insane and it simply must stop.

There is good news on the IBM stock chart to support the turnaround. During the coronavirus crisis, IBM stock hit a strong base of support that dates back to 1998. Such long-running bases are typically reliable support, so the stock will eventually find finds footing to serve as a base for a long-term recovery stint.

The idea here is to own IBM for the long-term because when management finally figures it out, the rally could be huge. On the other hand, this is not a hard line in the sand so investors should avoid taking full positions all at once.

Patience is key to success and strategically, the first hurdle in the short-term is that IBM stock needs to hold $115 per share. Conversely, the first upside opportunity is if the buyers can take it above $136 per share. Then they can trigger a $15 bullish setup from there. 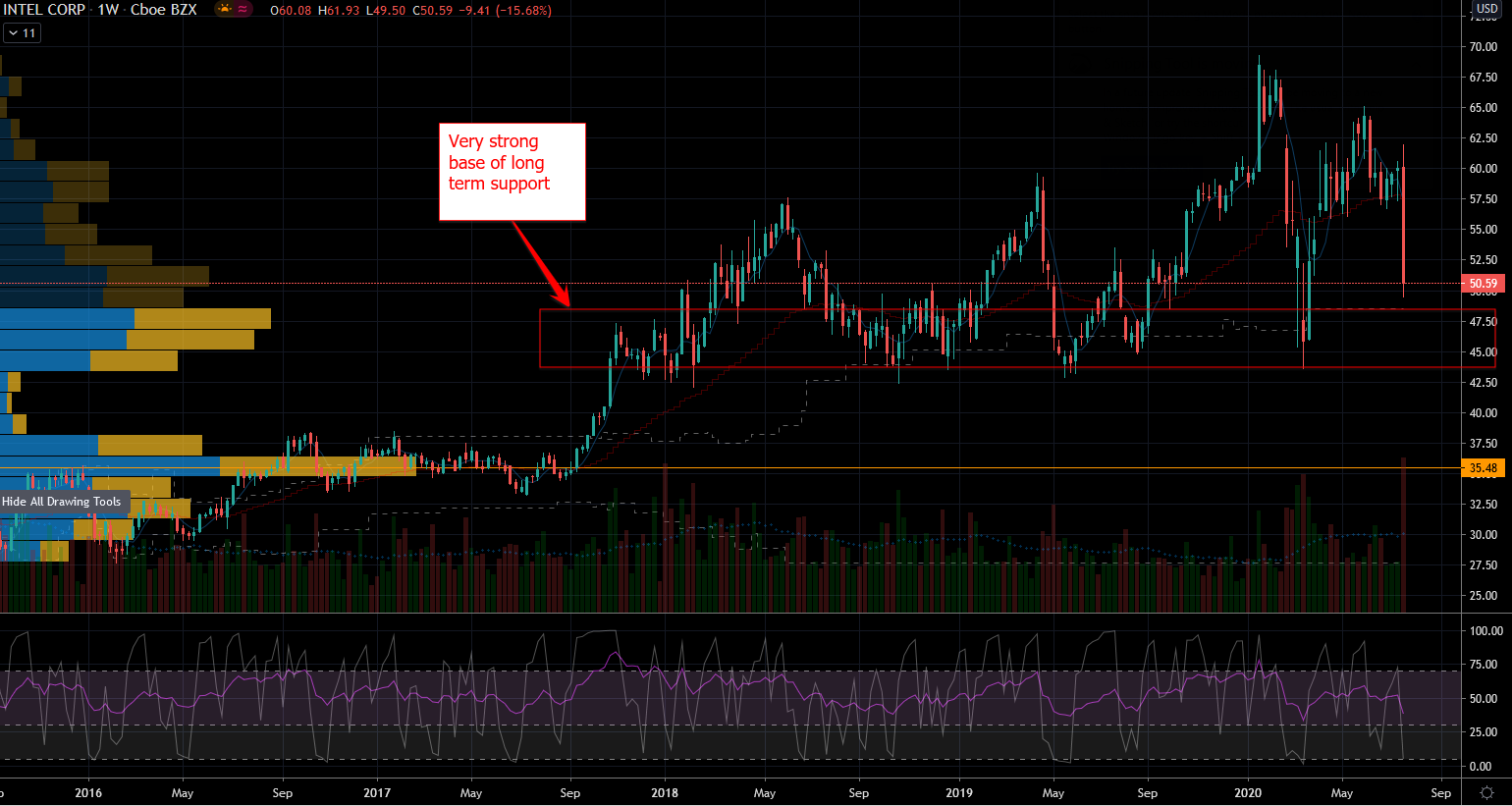 Intel is another long-disappointing stock. They had it all and it feels as if they let it all slip through their fingers. Case in point, year-to-date Intel stock is down 15% whereas its two main competitors Advanced Micro Devices (NASDAQ:AMD)and Nvidia (NASDAQ:NVDA) are setting records, up 51% and 73% respectively. Clearly Intel management has lost touch with what investors want.

The upside of bad stock performance is good investment metrics. Intel stock is cheap, with a P/E of 11. Furthermore, its stock price is less than four times its full-year sales. This is a very lean stock with not a lot of froth to shed.

Last week, INTC reported earnings and investors hated what they saw. Management’s message was underwhelming, but the results actually weren’t that bad. The problem was sky-high market expectations, particularly given their two competitors are superstars.

Buying low and selling high is the goal for any investor, and INTC stock is certainly low. It stands to reason that over the long-term, the present price should be a good starting point at least for a partial position. Intel is still a dominant player in providing brains to global computing powers. The demand in tech is exploding, especially after the coronavirus crisis, and INTC is still one of three major companies supplying that demand, so profits will continue for years.

Wall Street expectations will fall in line over the stock price opportunity eventually. Intel is going through a crisis of sentiment more than any fundamental problems. There is room for improvement of course, but it’s not the disaster that it looks like on Wall Street.

Below $50 per share Intel stock should find footing, but keep in mind this is not a hard line in the sand, rather a three year old zone of support. Undervalued stocks with a strong base almost always find support. Intel is a great example of this now and will fall back in favor once this crisis of sentiment abates. 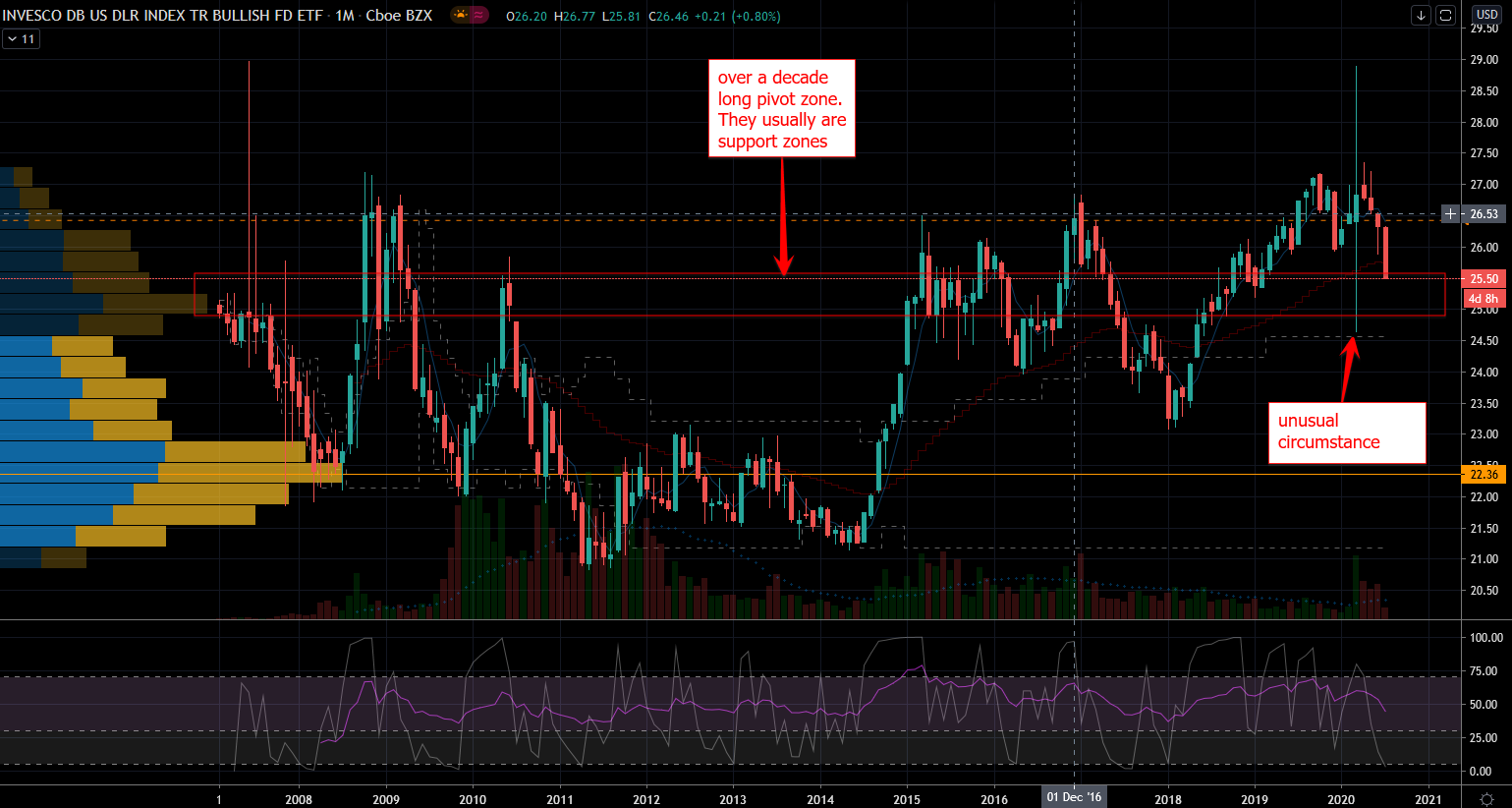 Instead, the UUP is setting new lows right now, but this will eventually reverse. Last week it reached levels that have been in contention since 2015. Those usually are support zones. But incredibly, this is not the 2020 low due to the massive March selloff. However investors can essentially ignore that because the set of circumstances that caused it are unique and highly unlikely to reoccur anytime soon.

Near support, it makes sense to start building a position in the U.S. dollar now for the long-term. The turnaround is not likely to happen on a dime, but it will come as it always does.

Loose monetary conditions make for a weak currency, so on paper the U.S. dollar deserves to be weak. But the U.S. isn’t the only country unleashing stimulus, so this anomaly will have to fix itself. TINA is an acronym that spells out “there is no alternative,”and it’s usually applied to the U.S. bond market. This concept is what should also support the U.S. dollar.

Money flocks to the U.S. bonds when overseas central banks are too aggressive with their stimulus. This should presently support the prices of the greenback but it has not lately. And therein lies the potential upside.

Buying undervalued stocks isn’t a foolproof strategy; sometimes they’re down for a reason. But usually, if the bullish thesis has any validity to it, investors will eventually right the wrong.

A good example of this is Micron (NYSE:MU). It fell out-of-favor on Wall Street in 2018 and they called it a value trap, even when its P/E fell below three. It rallied 115% from that bottom and recently investors were flocking to the stock with a P/E of almost 30.

The UUP deserves more respect on Wall Street and eventually the masses will figure it out so the opportunity is to be there first. Eventually investors will appreciate value, but the key point is to know when to buy those undervalued stocks without getting caught in value traps. Our three stocks today have a good shot at redemption soon enough. I would rate Intel first, the UUP second and IBM third.