3 Tech Stocks to Avoid (or Sell) for Now

In general, equity markets represent investor confidence. Since late July, most tech stocks have been declining amidst the bearish sentiment in the global and United States markets. It is no secret that the Chinese economy is beginning to feel the effects of the ongoing trade war. Other global powers, such as Japan, the United Kingdom and the European Union, led by Germany and France, are also showing signs of a slowdown. And earlier in the week, Argentina spooked the Latin American markets when its currency and equity markets lost a third of their value overnight.

In other words, unless we have a swift resolution on the trade war front, spending by the U.S. consumer may not be enough to improve economic prospects globally.

Therefore, investors are wondering what may be next for many of the tech stocks in their portfolios. Today, I’d like to discuss three tech stocks to avoid in the second half of August and possibly in September, too. These stocks are Baidu (NASDAQ:BIDU), Roku (NASDAQ:ROKU) and Tesla (NASDAQ:TSLA).

Investors may consider waiting on the sidelines if they do not currently have any positions open in these tech stocks. If they already own shares, they may either consider taking some money off the table during this market bounce or hedging their positions. As for hedging strategies, covered calls or put spreads with Sep 20 expiry could be appropriate as straight put purchases are likely to be expensive due to heightened volatility.

With all of that in mind, let’s dive a little deeper into each of these stocks. 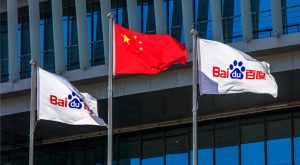 What is the main reason for the deterioration of Baidu’s market cap? Investors fear that the company’s growth narrative does not hold any more.

BIDU has two sources of revenue:

The tech market in China has grown exponentially in the last decade. And Baidu stock has been able to ride that wave. Baidu has over 70% of the Chinese online search market share. Until about a year ago, this leadership has meant growing advertising revenues and solid margins.

However, that is not the case anymore. Competitors like Alibaba (NYSE:BABA) and Tencent (OTCMKTS:TCEHY) have been pressuring its business model and ad revenues. Many Chinese consumers are using apps that bypass browsers and thus Baidu’s search engine. In other words, BIDU stock’s desktop search business is being disrupted or even displaced.

Wall Street is not sure if management knows how to go after the challenge to Baidu’s core business. The company has increased spending to attract more advertisers, which in turn has affected margins. In other words, the company spends a lot of cash to make some money.

Furthermore, as the Chinese economy slows down, all these companies chase the same advertisers, who have been scaling down ad budgets.

The second factor adversely affecting Baidu’s top-line growth comes from its ownership of iQiyi, the so-called Netflix (NASDAQ:NFLX) of China. Baidu still owns roughly two-thirds of iQiyi, so IQ’s results and its growth are reflected in Baidu’s consolidated numbers. And iQiyi stock is not making any money at this point either.

Management at iQiyi has underlined that as the company further invests in technology and builds content, the cost of revenue would be high — therefore the company will not be profitable any time soon.

And when you add the uncertainty around trade wars, it may just not be fashionable to buy BIDU shares in 2019. Overall, the bull thesis supporting BIDU stock is falling apart. It would be important to analyze the next earnings report expected in November to see if Baidu stock has a better investment proposition for long-term investors.

From a time and price analysis perspective, I’d expect BIDU stock to reach a 52-week low around Sept. 21. Until then, I’d not get too bullish on Baidu shares.

ROKU stock has been on a tear this year. Year-to-date, Roku shares are up 135%. However, it might now be time for investors to become cautious.

U.S. consumers are fast moving from traditional pay-TV services to streaming delivery services. Advertisers are following those viewers. That’s reason number one why, longer-term, I would not bet against Roku shares whose revenue increasingly comes from advertising. However, there is likely to be some further profit-taking in ROKU stock in the next few weeks.

Roku has been a pioneer in streaming video gadgets. The company’s revenue can be divided into two segments: “Player” which represents sales of its digital media boxes and “Platform” which includes advertising sales, licensing and other non-hardware revenue sources.

At present, Roku and Hulu, the video streaming service that is majority-owned by Disney (NYSE:DIS), are the market leaders in over-the-top advertising. OTT ads are shown on a TV screen through a smart TV or streaming device.

Roku is a growth stock, but it’s also a speculative one. Long-term ROKU bulls happily highlight many of Roku’s competitive advantages, starting with the platform’s first-mover advantage in OTT advertising, share of smart TVs sold in the U.S. and projected annual growth of over 30% in the rapidly expanding over-the-top streaming market.

On the other side of the coin are the nervous investors and short-sellers who are looking for any excuse to short ROKU stock. If Roku cannot keep up with the aggressive growth assumptions, then shareholders may become more concerned with low profits as well as its margins and the stock price could easily suffer. In other words, could ROKU stock price be getting ahead of itself?

Therefore, I’d encourage retail investors to exercise caution with Roku stock until the next earnings report, expected in October.

When Tesla released worse-than-expected second-quarter 2019 earnings on July 24, many investors possibly ended up with more questions than answers on what to expect from Tesla stock for the rest of the year.

Investors usually can get a sense of any current and future problems by looking at operational and market performance as well as at basic financial metrics and cash flow. In Tesla’s case, we may have a combination of signs of difficulty.

The past year has seen the demand for electric vehicles decline in the U.S. And Tesla’s Model 3 sales have not been at the levels expected.

The main reason behind the decline of the company’s  gross margin is that Tesla’s sales mix is increasingly shifting from higher-priced S and X models to the Model 3.  Model 3, which is priced at $35,000 is an entry-level car that carries lower margins.

As we discuss Tesla’s problems, we have to mention that the auto sector is susceptible to the trade-war risk. As the demand in the U.S. declines, Tesla needs to achieve increased sales numbers from overseas, namely China, the largest electric vehicle market in the world.

In late 2017, Tesla and the Chinese government agreed that the company would manufacture cars in China, and build and own a factory in Shanghai.

TSLA is continuing to build its manufacturing plant in Shanghai. However, the details as to when actual production will begin at the plant is sketchy. Tesla is yet to release definite dates and  production goals for the plant.

At this point, TSLA stock has had several months of poor performance, both in terms of metrics and the stock price. Therefore, before committing any capital into the shares, I’d like to see the next earnings statement, expected in late October. By then, we might even have an earnings warning statement, which would send the stock even further south.

At this point, Tesla bears have the upper hand and I’d consider investing in TSLA stock as a speculative bet.