We have kicked off the second half of 2019 with the S&P 500 at all-time highs after rallying some 17% so far this year. That is the best first half of performance for the index since 1997.

One trend over the past year is the S&P 500 has easily outdistance its smaller brethren, the Russell 2000 by a good margin. One would think at some point we get a reversion to the mean. Larger companies should be more impacted by trade tensions and slowing global growth given they get a much higher proportion of their sales from overseas.

It is one of the reasons I expect small caps to beat large caps over the next six months. So which small cap names are insiders currently buying? Here are three names from the biotech sector that caught our eye over the past week.

Let's start with sort of a battleground stock in AMAG Pharmaceuticals (AMAG) which was recently targeted by longtime biotech curmudgeon Adam Feuerstein who has long questioned the efficacy of the company's female hypoactive sexual desire disorder med Vyleesi. This injectable was just approved by the FDA last month.

A beneficial owner purchased over 400,000 shares of AMAG in a half dozen separate transactions from June 25th through June 27th. The analyst commentary also has mixed views on this name currently. Last week Cowen & Co. reissued their Hold rating and $13 price target on the stock. Late in the week, Barclays reiterated their Buy rating and $20 price target on the equity. 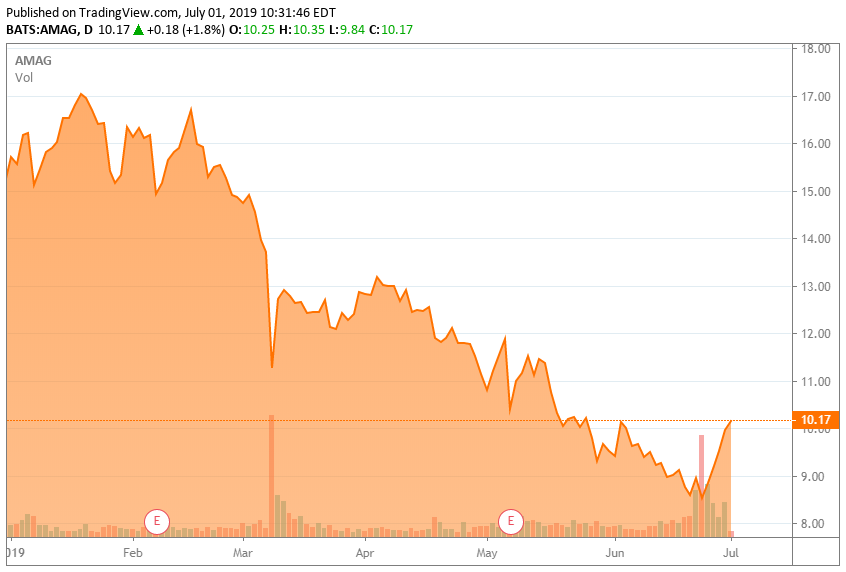 We also had another SA contributor who put out a piece last week refuting Feuerstein's view on the company's prospects. Despite the naysayers, at least one insider thinks there is value in the shares at the current trading level it appears.

Next up is Axsome Therapeutics (AXSM). This former Busted IPO has been on the top performers in the market so far in 2019. A director added almost $375,000 to his core holding on June 25th and June 26th. This follows other small insider buying in both March and May.

It seems insiders believe the shares could still have upside despite the massive run up in the stock so far this year. Most unusual indeed. H.C. Wainwright reiterated their Buy rating and $30 price target on AXSM last week. At the end of May, SunTrust Robinson whose $50 price target is the highest on the Street on Axsome, initiated its buy rating on Axsome. Here is the synopsis of that analyst call:

Although the stock has multiplied about 10-times year-to-date, it remains 'significantly undervalued.' The company's AXS-05 lead asset having been 'de-risked' by the incoming data and is positive on its opportunity in Major Depressive Disorder, Treatment Resistant Depression, and Alzheimer's Disease Agitation. For the latter, the analyst says AXS-05 has the potential to be a 'best-in-class drug,' while also taking large market share in the other two conditions if approved. The analyst adds that the upcoming 5 mid-to-late stage clinical readouts over the next 12-18 months should generate more shareholder value for Axsome Therapeutics.

We stated we saw the risk/reward profile of Axsome favorable in December of last year before the stock's big run. While the insider buying and analyst commentary are encouraging, we have been culling profits in this name using the Jensen Rules. 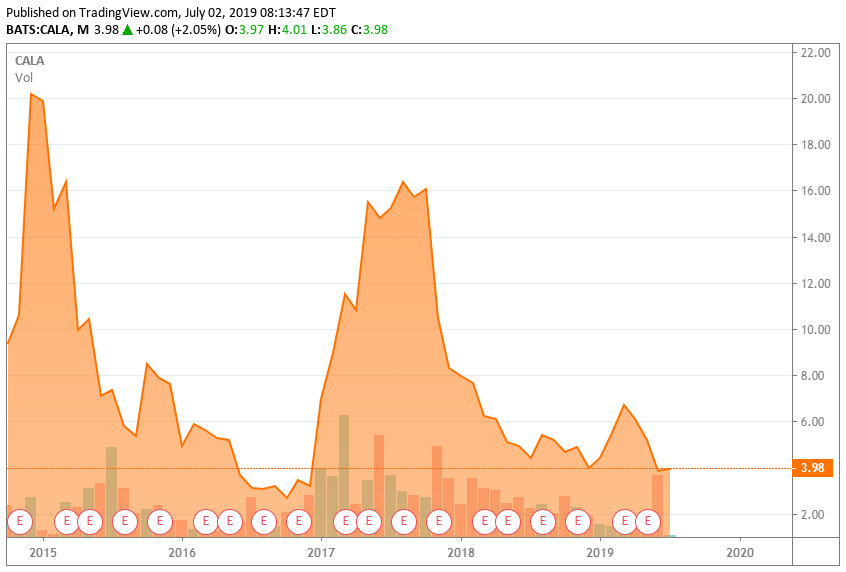 Finally, we end with Calithera Biosciences (CALA). As can seen above, it has been a wild ride for shareholders of this small biotech concern since it came public in late 2014. Both the CEO and another officer both added $200,000 to their core holdings in CALA on June 25th. It was the first insider buying in this name in just over two years.

This small oncology concern recently posted encouraging mid-stage trial results in mid-June and then immediately also announced a secondary offering. The company does seem to have an extensive early to mid-stage pipeline.

There is very little analyst coverage on this small cap concern. The only analyst commentary I can find on Calithera in 2019 is the following. On May 30th, Citigroup raised their price target to $10 from $7 previously while maintaining a Buy on CALA. William Blair reiterated its Buy rating on June 21st. Insider buying might indicate this name is worth some due diligence. A deep dive on Calithera will be provided to Busted IPO Forum members next week.

And those are three small cap concerns with recent and notable insider buying.