3 Reasons Why A Massive Selloff In U.S. Equities Is Very Unlikely

One of the most striking observation in the US is that even though the country is currently experiencing its worst riots since 1968, its worst economy since the Great Depression of the 1930s and its worst pandemic since the Spanish Flu in 1918, the equity market keeps recovering strongly from its March lows with the S&P 500 breaking through its psychological 200D SMA at 3,000. Historically, not all recessions have led to a significant 30%+ drawdown in US equities, but the most severe recessions have generally been associated with a 40%+ selloff in stocks. Figure 1 shows the history of the 6M and 12M drawdowns of the S&P 500 since 1928; we can notice that the four times when stocks fell over 40% were in 1932, 1938, 1974 and 2008/2009. Therefore, with most of the economies set to experience their worst economic downturn since the Great Depression, one question has been haunting investors: why equities are not trading much lower?

In this article, we look at the three (of the many) reasons why we think that the probability of a massive selloff this time in the US is low. The economy is now expected to plunge by over 50% in the second quarter (annualized) according to Atlanta Fed GDPNow model, but the S&P 500 continues its positive momentum and is currently standing 10 percent away from its all-time high reached in February. 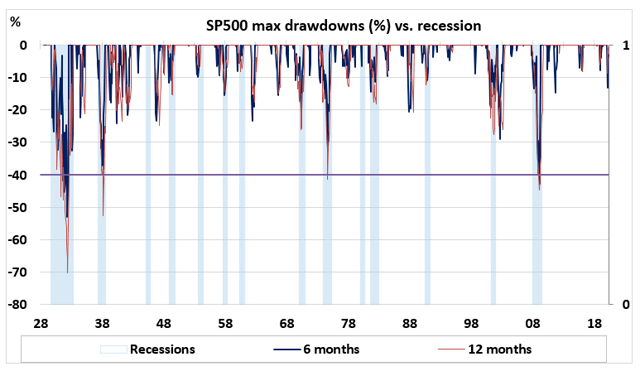 First: Do not underestimate the Fed

The massive expansion of the Fed’s balance sheet during the panic selling makes it difficult to believe that US policymakers can accept a 40%+ fall in the stock market. The US stock market capitalization is estimated at $30tr in total, which represents nearly 150% of the economy, implying that a big drop in equities will result in a sharp contraction of consumption as a significant portion of the US equities are invested in pension funds. If stocks were to fall again due to rising concerns over a second wave of infection (i.e. more lockdown) or due to any other factor, we strongly believe that the Fed could "cross the Rubicon" and start buying US equities. After all, the Bank of Japan has been buying stock ETFs for years now and the SNB has quadrupled its US stock holdings in the past five years to nearly $100bn.

Figure 2 (left frame) shows that the Fed balance sheet assets have grown by nearly $3.5tr in the past few months to over $7tr and are expected to exceed $8tr by the end of this year and $12tr by the end of 2021. Even though investors could argue that the annual change in US equities will not be as near as the Fed's annual pace of purchases, it certainly limits the downside risk in the medium term.

Second: US stocks - a "safe" asset

Secondly, we think that international investors can actually buy US stocks as an alternative safe, not because economic conditions are good, but because most (non-US) nations are experiencing a "slow" recovery and high uncertainty post lockdown, weighing on risky assets. We do not think that the massive liquidity injections from the Fed (relative to other central banks) will be enough to weaken the USD in the medium term and we still think that the US growth will outperform most of the DM and EM economies, which should lead to a stronger USD. Figure 3 shows that US equities (SPY) have historically outperformed international (non-US) equities when the dollar strengthens. 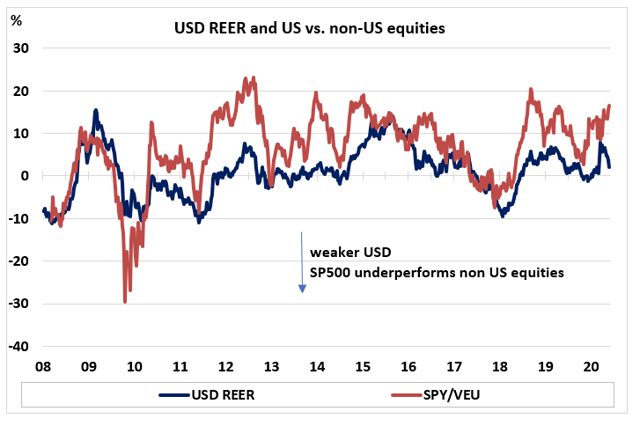 Eventually, we saw that the Covid-19 crisis has boosted "monopolization" and market power, resulting in a strong recovery and a higher market capitalization of the top "MAGA" stocks. For instance, e-commerce penetration levels have increased to 27% (as a percentage of retail sales), up sharply during the lockdown period (see Bank of America 8 weeks vs. 10 years chart).

Figure 4 (left frame) shows that the S&P 500's top 5 companies (Microsoft (NASDAQ:MSFT), Amazon (NASDAQ:AMZN), Alphabet (NASDAQ:GOOG) (NASDAQ:GOOGL), Apple (NASDAQ:AAPL) and Facebook (NASDAQ:FB)) make up 20% of the index, a trend that can continue in the near to medium term. It is also fascinating to see that the V-shape recovery has already happened for the FANG+ futures index (figure 4, right frame), which is currently trading at its February highs.

We can also observe an interesting development in the performance of the S&P 500 stocks in the past two years. In figure 5, we compute the annual return of every single stock of the S&P 500 index for two time periods (May 2019 and May 2020) and ranked them based on their performance. We can notice that the percentage of companies down over 50 percent in the previous 12 months was up from 1 percent in May 2019 to 5.4% in May 2020.

On the other hand, the percentage of companies up more than 50 percent is up from 2% to 4.6% in 2020, clearly indicating the market power of the MAGA stocks. 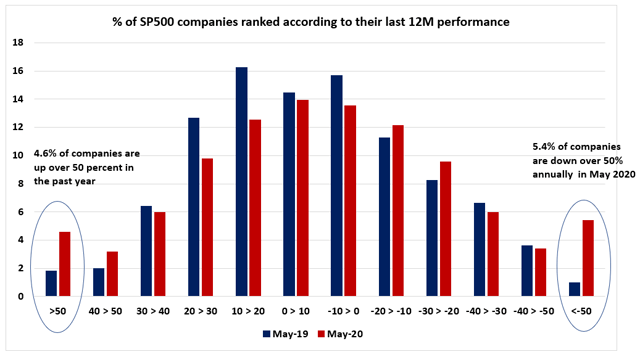 To conclude, we assign a small probability to a 40%+ selloff in equities coming forward despite the massive drop in GDP growth and the sharp increase in unemployment rate in the second quarter. Our main scenario favors a flat market for the next 12 months due to the high uncertainty with some recurrent periods of 10-15% drawdowns, a similar dynamic that we observed between the last quarter of 2014 and the beginning of 2016.