Three weeks ago the expert rhetoric on Wall Street was predominately bullish. The conversations were to determine which sectors had the biggest upside potential. The analysts were in a race to see who has the highest price target on high-flying stocks like Tesla (NASDAQ:TSLA) or Zoom (NASDAQ:ZM) to name two. Then after a handful of red days the conversations shifted to which stock had the furthest to fall. Great mega-cap stocks are falling and they deserve investor attention.

The bullish notes have all but disappeared in mere days. Even after we have already had an official correction by Wall Street’s measures, the experts are pointing out the opportunities. It seems the prevailing strategy is to buy high and sell low. But they have it backwards. Listening to the experts is confusing because they tend to be retrospective experts. They often upgrade stocks after spikes and they downgrade them after corrections. Luckily we can think for ourselves and find good mega-cap stocks to buy in this mess.

The fact of the matter is that nothing has changed in the last month, but sentiment is bruised. The novel coronavirus and banking news from Europe have a lot to do with that. The macroeconomic conditions are still bad and the Federal Reserve is still a friend. Amazingly, they got more aggressive last week so they are committed.

The dynamic that was driving stocks higher before September is still here, so sentiment will heal itself soon. Meanwhile, there are a ton of great mega-cap stocks to buy during this malaise. Some of the best include:

Let’s take a deeper look at what makes each of these among the best stocks to buy now.

Mega-Cap Stocks to Buy on This Dip: Apple (AAPL) 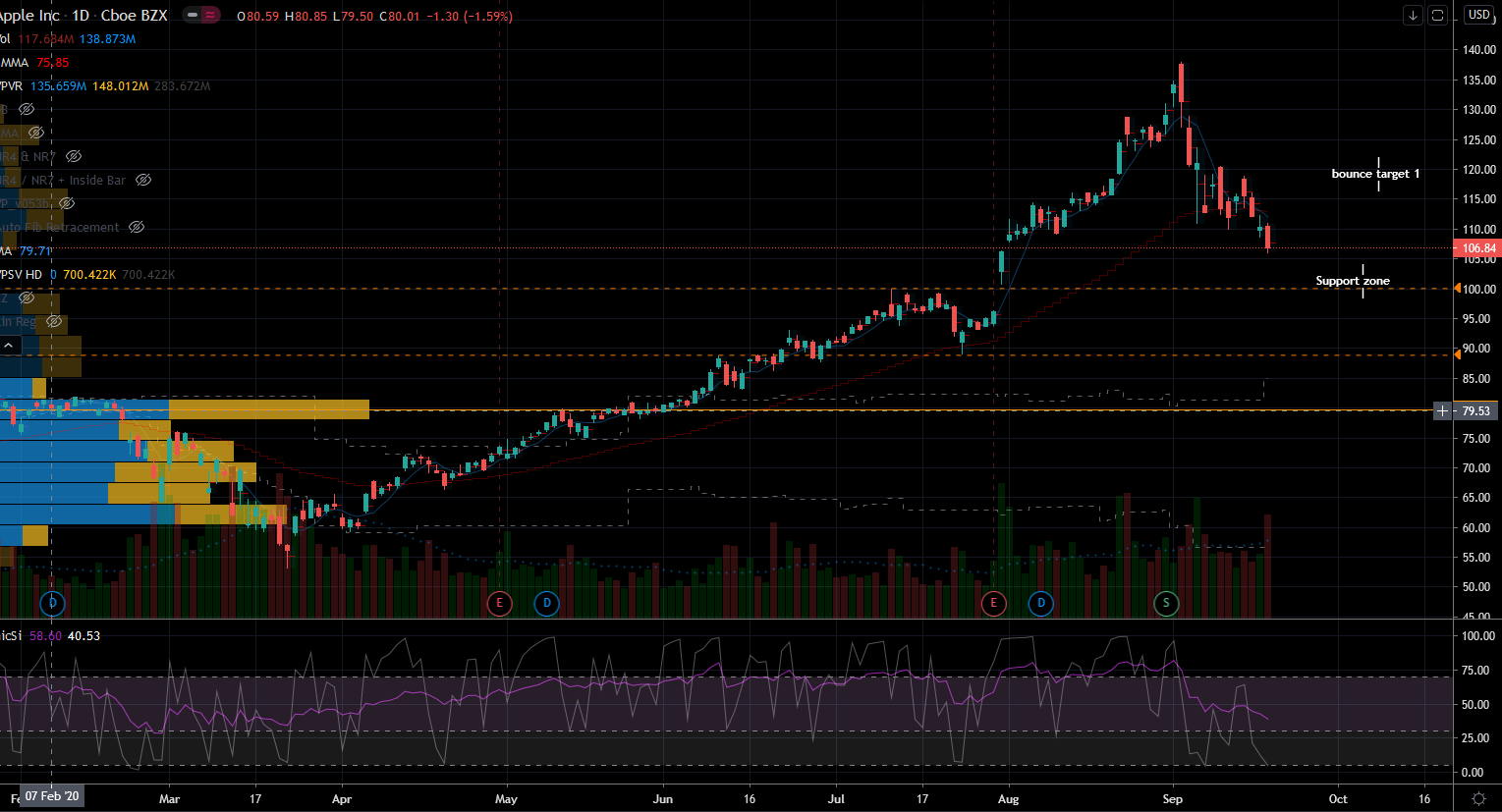 I chose AAPL stock because I feel obligated to do so. This is a bullish thesis by default for as long as markets are bullish. Apple won’t correct on its own while markets rally. I am not a fan of the leadership under Tim Cook, so I am not a perma-bull on it. I can’t prove a negative, but I bet that it has flourished in spite of, not because of, his efforts. Regardless, Apple is still a cash machine generating $67 billion per quarter. I won’t let emotions stop me from recognizing a good opportunity. After falling 25% from its recent highs, the stock is a buy regardless of the silence from the experts.

This boulder is so big that it will continue to roll uphill, especially if the bull market continues. Eventually they will need more catalysts because the subtle ones they have are underwhelming. Mr. Cook is succeeding in shifting the sales mix and now more than half of its dollars come from services. The goal there was to divest it from its dependence on the iPhone hardware selling cycle. But make no mistake about it, Apple is still an iPhone company.

Those service revenues will vanish in a heartbeat if not for the iPhone. The risk is that years from now, someone will invent the next new thing and it most likely won’t be Apple. If that’s the case, then the company will eventually be in trouble. Today’s thesis is more short term and AAPL stock is definitely oversold. It has support between $105 and $100 per share. From here I bet the upside potential is greater than the downside risk. 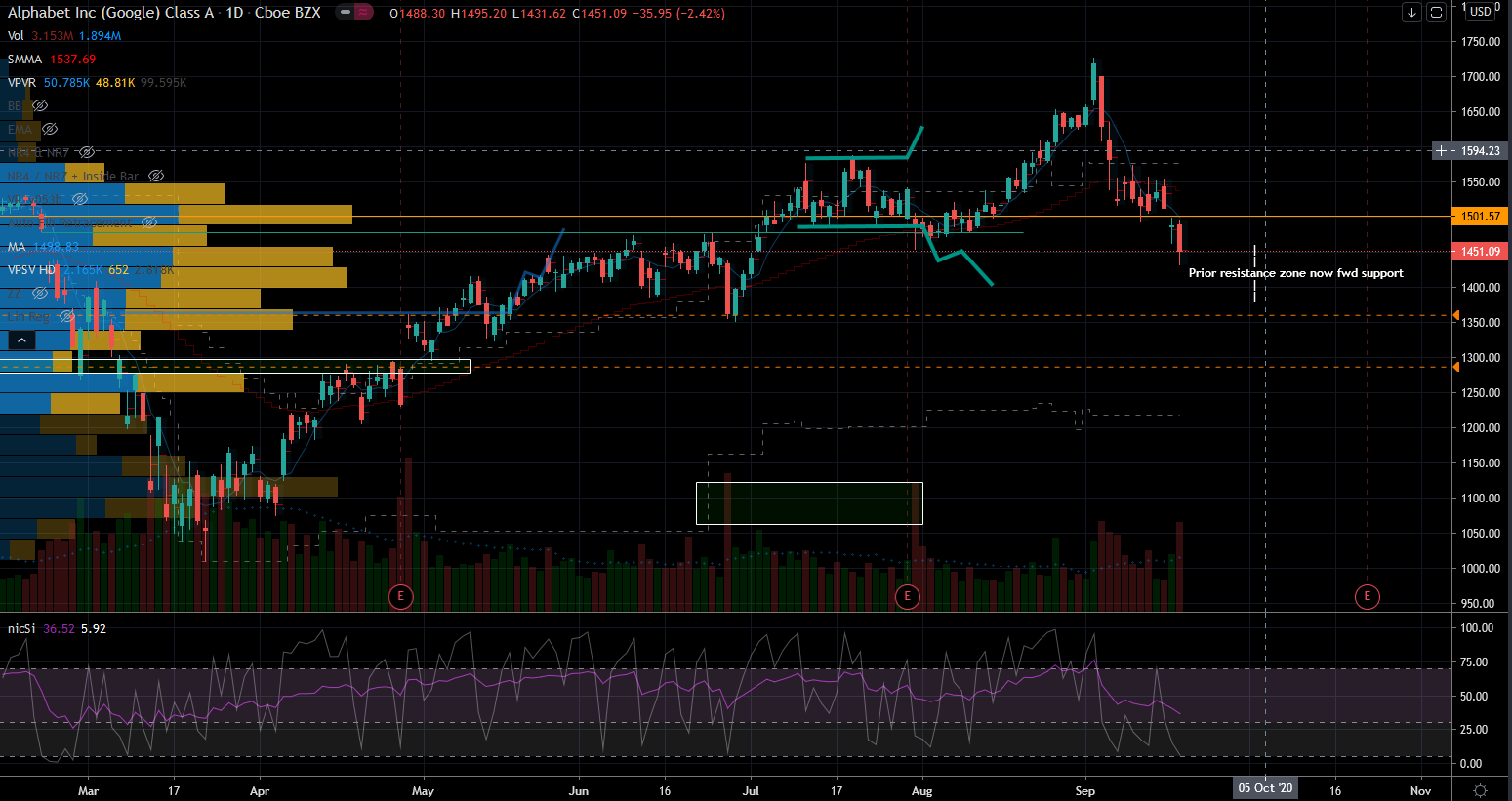 My thesis on GOOGL stock is very similar to Apple. I am a big fan of how much cash they generate, but underwhelmed by management of late. They lost the edge ever since the split and they seem content to just stick to their one trick. The company has so much potential, especially if you count what YouTube can do. Billions of people are on it every day. yet Facebook (NASDAQ:FB) is quickly eating their lunch.

Fundamentally it is in about the same boat as all the mature mega-cap stocks, so there are no flagrant issues. It comes down to the matter of technicals. It too is oversold in this correction and more so than AAPL. GOOGL stock has shed more relative froth than most other mega-cap stocks, so it should have less to fall before a true bottom. Starting longs into these fears has reasonably good odds of mid- and long-term profits.

Alphabet stock recovered more reasonably than most after the February crash. The Nasdaq overshot the mark on the way up because of the investors love for internet businesses. The Invesco QQQ ETF (NASDAQ:QQQ) still has to fall 7% to reach the February top. GOOGL stock is already 7% below its mark. Furthermore, it is falling into support because the levels around $1,360 per share were a strong base in June. Furthermore, this would mark the 50% Fibonacci retracement of the quarantine rally. Selling this stock now seems more panicky than a strategy. It’s a quality company with a reasonable price-to-sales ratio. 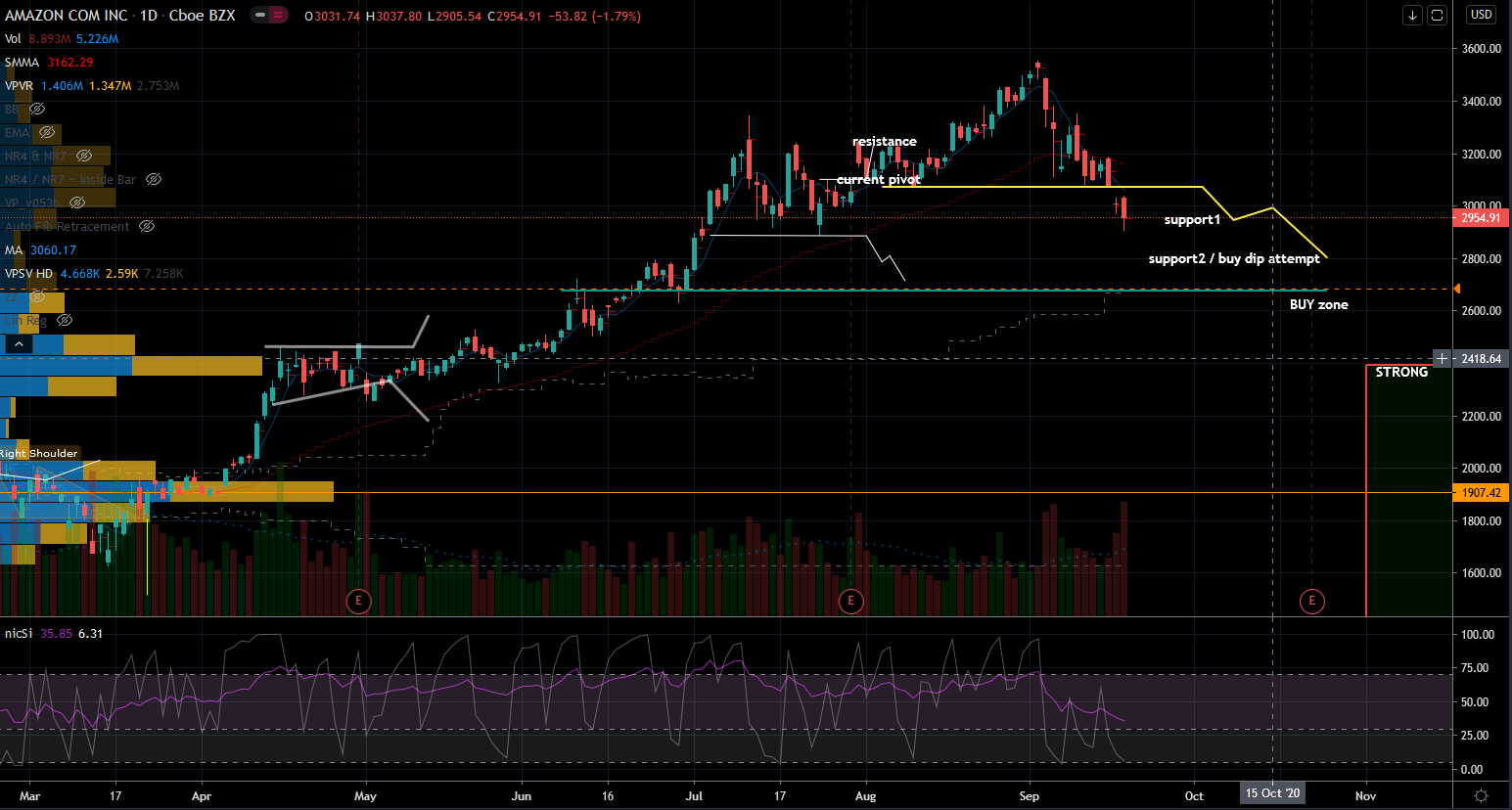 I saved the best for last. Amazon gets my vote as the best company that has ever existed. Under the leadership of Jeff Bezos it never ceased being a startup. This was the reason the critics lost so much money shorting it for a decade. The naysayers failed to see that its valuation didn’t matter. Amazon always delivered the growth on which they spent their profits. Being expensive is great if you have the sales growth to back it up, and they did.

The pandemic was a human tragedy, but it became a great catalyst for Amazon’s business. All shopping had to go digital during the lock down, and most of this continues even now. We can all attest to that from the number of delivery trucks around our neighborhoods all day and every day. The quarantine gave the digital revolution a huge booster shot, and this played extremely well into AMZN stock.

What is not so obvious is that it is the cheapest of all the mega-cap stocks. Yes, it is so because it only has a price-to-sales ratio of 5.4x, so there is hardly any froth into the stock price. The price-to-earnings ratio is high but that is the wrong metric to apply onto this perpetual grower. They spend a lot to grow a lot and that’s their simple formula for success. If this market-wide panic continues, AMZN stock will find support at $2,800, $2,700 and $2,450.

Any of these levels would make for a good spot to buy into a long-term portfolio. For perspective, this time last year, it was under $1,800 per share.

Of the three mega-cap stocks today, I like AAPL stock the least from a trading perspective. AMZN stock is the favorite on dips because the quarantine wind in the sail is not about to die. Bezos’ team will outperform for years. I like GOOGL second best because it has the most reasonable level relative to the pre-pandemic levels. AAPL is an attractive investment, but has fallen out of favor so it may languish a little after this tizzy is over.