3 Energy Stocks That Are Worth Trading Right Now

In my early years, I learned a simple lesson that has served me well: Don’t change a winning strategy. In this case, I would like to repeat what worked back in November as it played out well. Back then, consensus was that energy stocks were going to be winners, but instead of chasing upside potential with the herd, I proposed selling the downside puts.

The result was a win and without any money out of pocket. Those who chased lost big.

My thesis today remains unchanged. The range for energy stocks is the only set known and one that investors can bank on. Oil prices remain choppy, but they are still trading in a well-defined range. It is important to note that the consensus opinion on oil prices is almost always wrong. So it’s not a surprise if it rallies now in the face of nothing but negative rhetoric in the media.

Options are scary to many people, but so is the hype in the media over unrealistic expectations like the energy rally last fall. The fear of options stems from a lot of myths, so it’s a small obstacle worth overcoming.

In this case, they can lend a hand and the concept is easy. Instead of buying a stock and hoping for rallies to profit, the idea is to sell options puts and generate income. This way, the trader won’t even need a rally to profit. And the worst case scenario would be to own that stock at a much lower level. Buying a stock leaves me hoping for a rally. On the other hand, selling a put leaves me hoping the stock falls, so I can buy it cheaper, and if it doesn’t fall, I make money anyway.

The three stocks in focus today are Chevron (NYSE:CVX), Exxon Mobile (NYSE:XOM) or, alternatively, the Energy Select Sector SPDR Fund (NYSEARCA:XLE). When it comes to energy stocks, I find it best to only trade the biggest. These are the ones whose futures are most secure in case the worry warts are correct. A lot of the companies in the sector are vulnerable due to high debt levels and wonky cost structures or commitments. My goal is always to eliminate as many risk variables as possible. Case in point the 22% dip in Whiting Petroleum (NYSE:WLL) just yesterday. 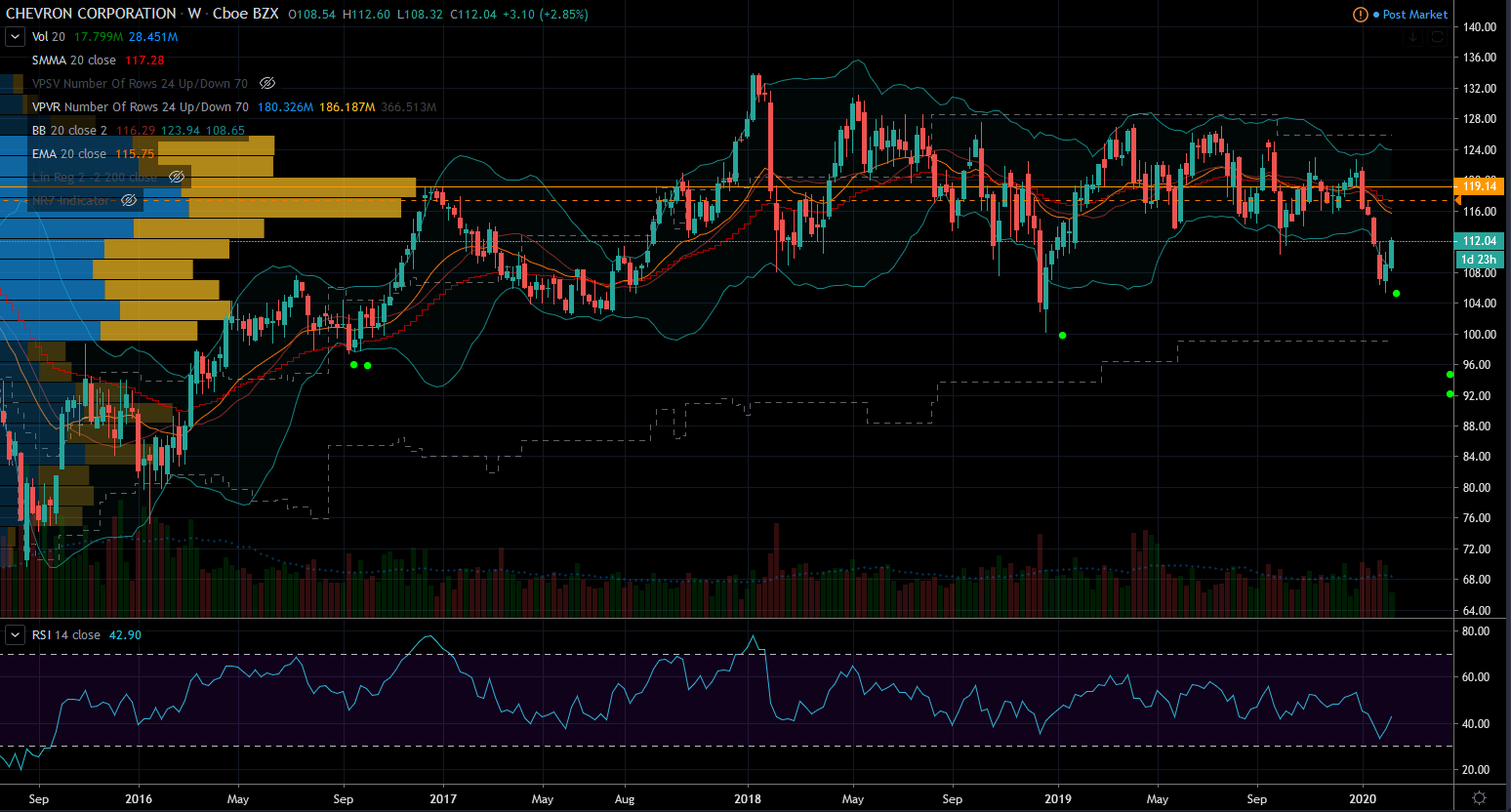 Since my last write up, CVX stock continues to lag the S&P 500 and things got even worse. Markets keep setting new highs while it struggles for grip. It even had a full correction but luckily found footing and is now mounting a comeback of sorts — it’s up 6% off the $105 low. And therein lies the base for the opportunity today.

The method is the same as last time, where I create income from the value in the stock rather than bet on the upside hopium to materialize. It has been able to maintain a rally this big for far too long, so I may be late buying it now.

For those already long the CVX stock, they can enjoy the ride with proper stops. I expect that it will face resistance near $114 per share, as it has been in contention since March 2012. You can see clear evidence of this on October earnings, the June and August bottoms. If you have a strong stomach, check out the weekly ledge-like candle of April 27, 2015.

It’s clearly a pivot point, which usually creates a resistance zone. The bulls often need more than one try to breach.

The trade this time would be to sell the CVX June $95 puts to generate over $1 of income per contract. This would yield maximum profits as long as CVX is above that for the next few months. Otherwise, the worst case is that the trader would own the shares at a 15% discount from the current price. This also breaks even at $94 per share. CVX has two important support lines to hold at $105, then more importantly, at $100.

Losing these would trigger bearish patterns with up to $20 worth of downside risk from there. It’s not my scenario, but it is one that exists, especially if the markets correct from all-time highs. 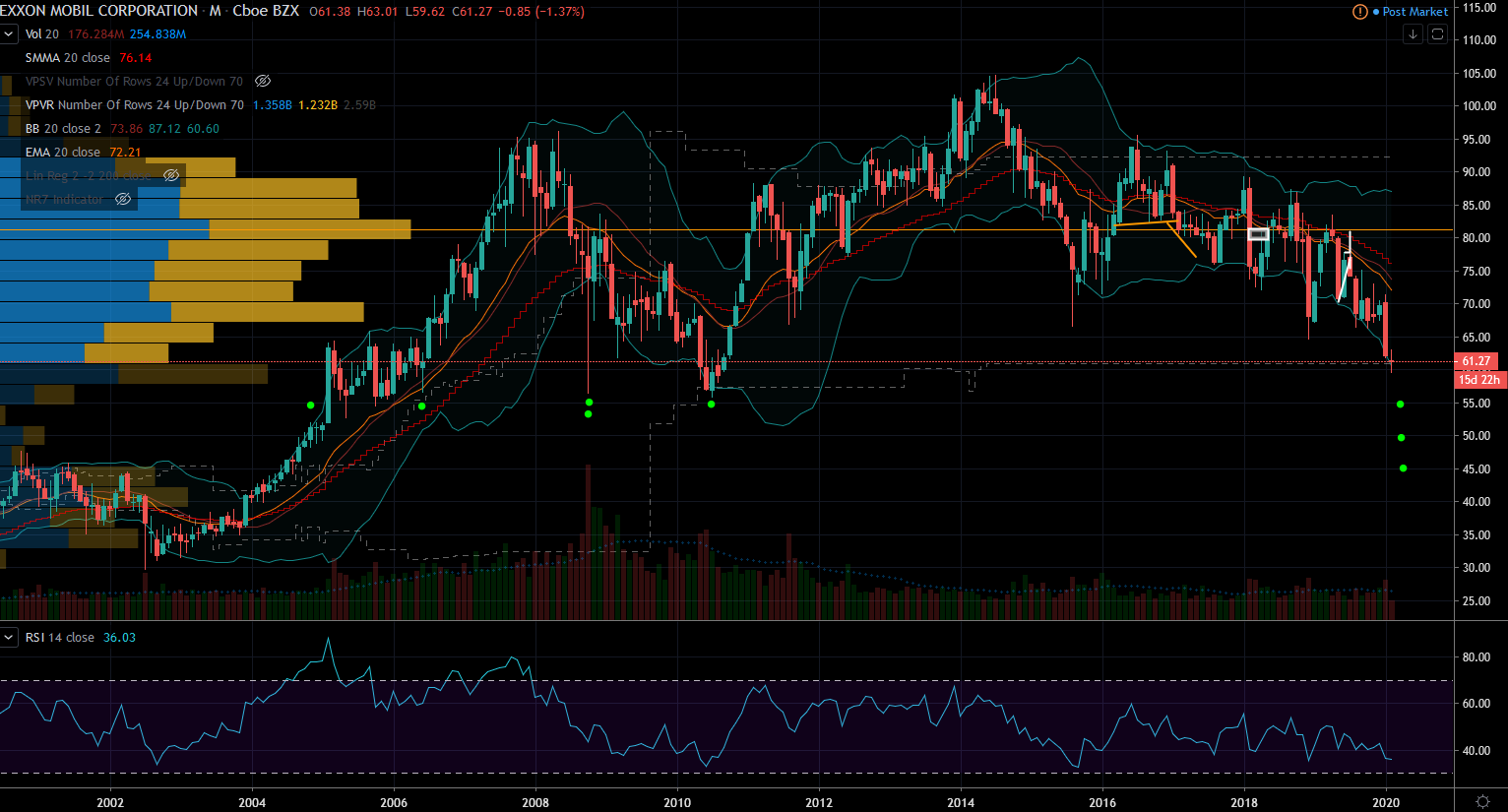 Usually XOM trades similarly to CVX, but for the last two years they have been diverging. Unlike CVX, Exxon stock has been setting lower-highs and lower-lows.

So why would I consider going long or catching the falling knife now? Support.

The price is approaching a long-time pivot zone dating back to 2005. This is visible on the monthly chart, so that makes it a zone and not a hard line in the sand. So it is really important to use a method that allows for wiggle room. Options can do that, as discussed in the CVX example.

But the first step is to find the shorter-term support zone for Exxon stock. Unfortunately, since the bounce has been meek, there is nothing to shoot against until 2010 $55 bottom. So the zone below it should be relatively safe under the assumption of prior support will hold on dips. The descending wedge in the stock is so sharp that logic suggests that a big rally can ensue, especially given that the technicals like the RSI are at extremes.

Therefore, buying the stock for a trade could work out well, but I prefer more assurances before risking my money.

Today’s idea goes even further by building a buffer zone between the current price and risk. Instead of buying the shares and risking $61 right now with absolutely no room for error, investors can sell the puts instead and collect the premium.

Specifically, the XOM June $55 put pays over $1 per contract to open. If the price falls below it, then the investor gets to buy the stock 10% cheaper and keep the premium income to boot. The trade would then break even at $54 per share.

The alternative would be to buy it now and suffer a 10% loss if it falls to $55. Options sound daunting, but they are worth learning because they can help improve any style of investing from creating synthetic dividends to protecting stock for free. 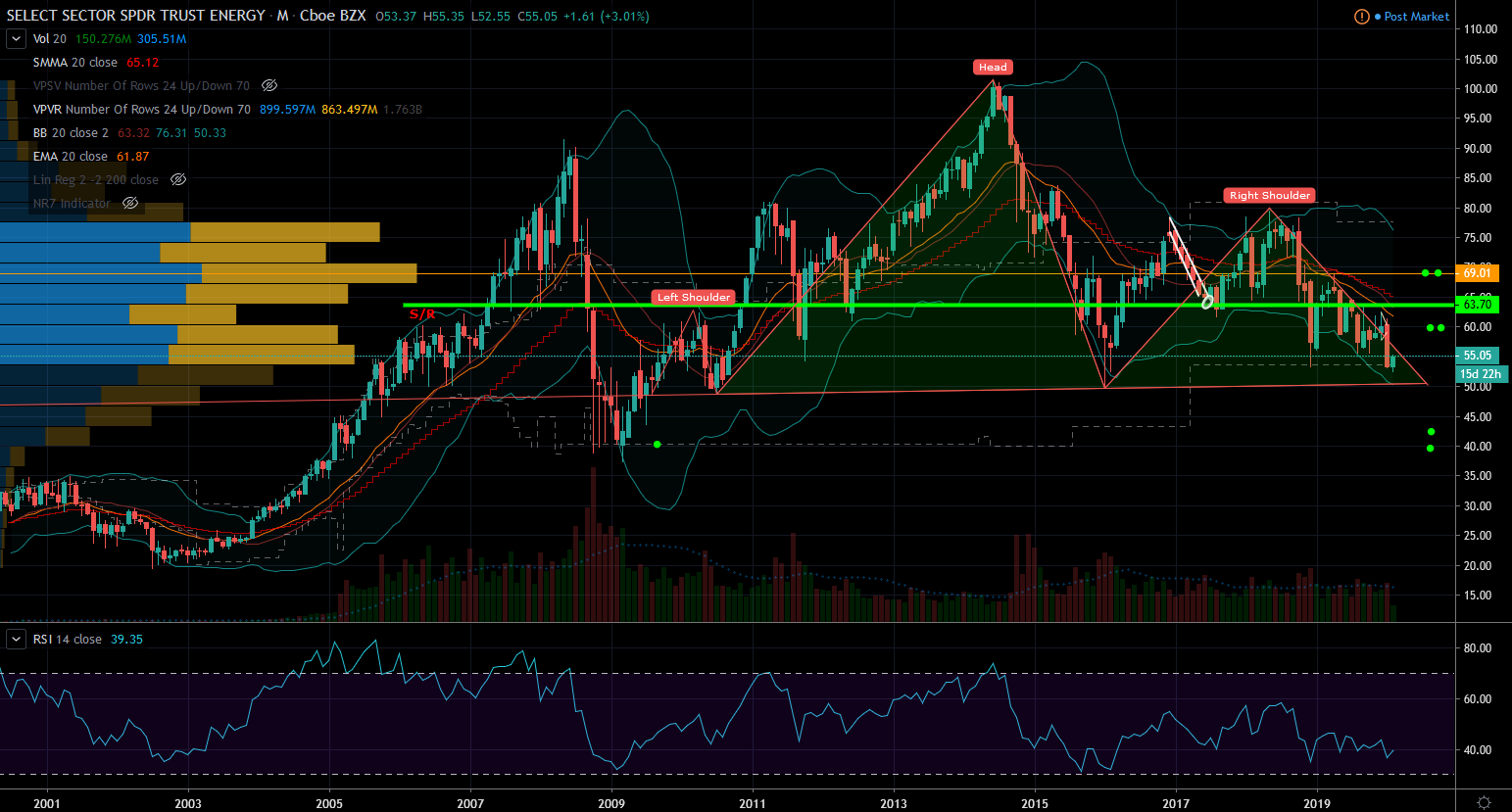 Instead of betting on particular stocks in the sector, the XLE ETF offers a viable alternative. XOM and CVX account for almost half of its entire composition. So it too is stuck in mud and can’t get any traction. XLE is down 14% in the last twelve months, while the S&P 500 is up over 20%.

Nevertheless, so far the bears have failed to breach below $50 per share in a five years. So it is reasonable to assume that the support will hold. But when hard nosed support fails it usually overshoots to the downside. So in this case, if XLE goes below $50 it could target much lower and its first support below would be between $43 and $40 per share.

It probably will take really bad news to bring about the worst case scenario, but nonetheless the risk exists as slim as it is.

So to follow the same trading strategy as the other two, an optimistic investor could buy the shares, risking $55 now and hoping for the bounce to materialize. But it would probably be best to place a stop loss order to avoid the disaster that $50 would trigger. It is also important to note that the zone from here into $60 per share will contain resistance.

As such, the rally will need a lot of sustained hard work from the bulls, which we haven’t seen in a while. Above $62 can fuel a bigger rally because they would then breach the descending lower high trend that has been ongoing for months. There will be resistance at $64 and stronger at $69.

Or instead of buying and hoping, they can sell the XLE July $48 put for about $1 per contract. Here to win, the XLE needs to stay at or above the sold put. Otherwise, the investor owns the shares at a 14% discount from today and break even at $47 per share. Selling a put spread instead would limit the risk, but also limit the potential profit.

If I were to order my preference among today’s trade setups, I would put Chevron first, XLE second and Exxon last. The logic is easy because Chevron is cheaper than Exxon and it is also trading better than the XLE. I placed Exxon last because there might be something specifically wrong in the company that explains the persistent selling. Betting on the XLE spreads this risk among all the components of the exchange-traded fund.

The last note of caution would be about the whole market. I have been bullish on it for over a year. But up here, I fear the sentiment is too reckless so we could see a correction in the indices that would drag these stocks down with it regardless of individual support zones.