Impeachment? Stocks don't care. All major indexes greeted Wednesday's historic news with a giant yawn and then promptly rallied, focusing on low interest rates and slow but steady economic growth. Stocks show little of the euphoria typical of major market tops. Stocks may be expensive, but they are not tulip bulbs - at least not yet. Stock investors remain sanguine but cautious. This is evident gauged by the amount of money they been removing from the market in 2019. 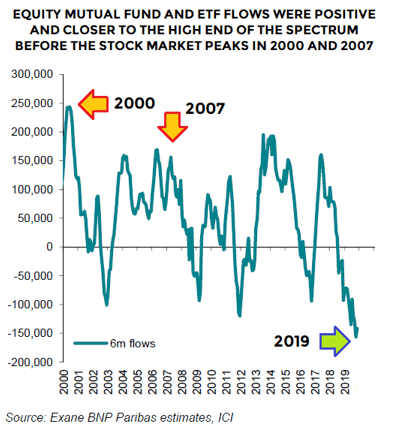 Stocks are where they are mainly due to two factors: low interest rates and corporate buybacks largely facilitated by low interest rates. As we outlined in our November blog post, "Fractional Reserve Banking and Potential Trouble in the Bond Market", corporate America has all the cash it needs, and then some.

Companies are buying back their own shares because cheap money is making it profitable. Corporate America believes the most productive use of the excess cash thrust upon them by the Federal Reserve (and the rest of the world's central banks) is to invest in their own shares. Excess cash is being returned to investors rather than spent on projects without the prospect of a better return. We believe the lack of better prospects should be seen as a warning. Money can't keep chasing its tail forever.

The Fed's decision to lower rates three times during the longest stock bull market in history has reinforced this potentially dangerous behavior. Apple (AAPL) alone is buying back $75 billion in stock. As the chart below illustrates, the S&P 500 rallies when buybacks increase and declines when they decrease. 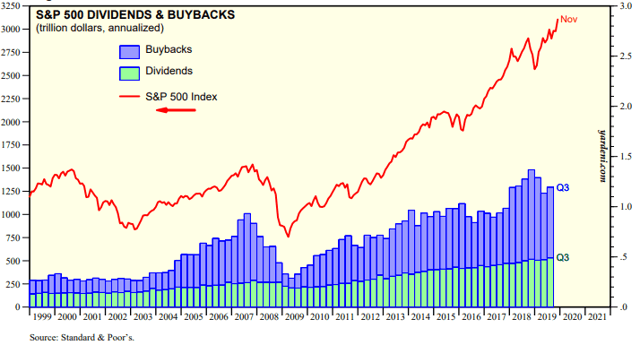 Anything which threatens buybacks could have an outsized impact - especially with the retail stock investor on the sideline. Three things that have the potential to curtail stock buybacks are: 1) higher interest rates, 2) excessive corporate leverage, and 3) tax increases on capital gains. Higher interest rates make lending to buy back stock more expensive. Excessive debt puts free cash at risk as more funds are needed for debt service. Higher taxes on capital gains lower the utility of holding stocks.

We covered exploding global debt in our blog post "Fractional Reserve Banking and Potential Trouble in the Bond Market", but corporate debt is also soaring. Depending upon who wins the Democratic primary, sharply higher taxes on gains and/or stock market transactions could be part of a new Democratic administration in January.

Short-term interest rates have stopped going down. The Federal Reserve has basically told the market not to expect any more rate cuts in 2020. The Fed is always reluctant to act during an election year to avoid the perception of influencing it. However, long-term interest rates have been heading higher as more European central banks abandon the failed experiment known as "negative interest rates". One of the first adopters of negative rates was Sweden. It just raised its key rate to "0".

Bond Euphoria Under the Radar

We believe the real "tell" for trouble in 2020 will come from the bond market. Bonds have been the beneficiaries of "risk off" spasms in stocks the entire way up. As bonds become more expensive, their yields fall. The bond market has been the beneficiary of retail investor caution in stocks. Most of the money not going into stocks is flowing into bonds.

Retail traders may be reticent about investing in stocks, but they are practically giddy about throwing money at bonds. This happens as bond prices are higher and bond yields are lower than nearly any time in history. The financial press is obsessed with the stock market, but no one is talking about the big bubble inflating in the bond market. As we indicated in our November blog, the bursting of this bubble could do far more damage than a similar setback in stocks. 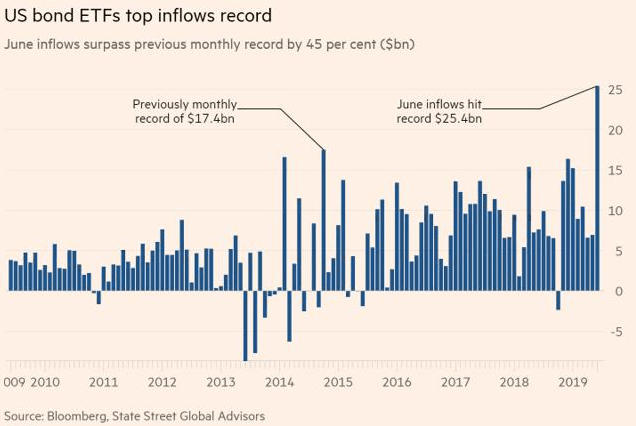 We posted this chart in a previous blog. It illustrates a market which is losing momentum. Ten-year futures are making low highs, and if they decline below 128-01, they will be making lower lows. A Friday close below this level will break support, putting our downside targets of 125-32 and 121-32 into play.

RMB trading customers who followed our suggestion to purchase March 127-00 T-note puts for $500 or less should continue to hold their positions. We believe this is a reasonably priced downside hedge for anyone who holds a substantial amount of bonds, bond funds or bond ETFs.

Lack of liquidity in the more distant contracts means we need to stick to the March options for now. We will be looking at new hedges as the New Year progresses.

The approaching holidays mean the next ten days could see reduced liquidity in all the markets. Big moves often happen in illiquid markets, so we want to be ready. The sugar and cotton positions we suggested purchasing in recent blogs are looking good. Both are very close to double the initial price we recommended paying.

RMB trading customers who purchased more than one position in either market may want to consider entering open orders to exit half at double your initial entry level. A fill essentially takes your initial risk "off the table" and allows you to hold the balance of your positions with "house" money.

Here are the updated charts of these two markets: