10 Stocks to Buy for September

With August’s trading winding down, we’re heading into a month that’s known to be problematic. The average September return for the S&P 500 is a loss of 0.62%, and it’s down more often than it is up. And this year, we’re heading into the month still overbought from the big bounceback from early in the year.

It’s a dangerous time to be taking on new long positions, but that danger doesn’t necessarily apply across the board. There are a handful of stocks well-positioned to rally through what could be a bearish backdrop.

To that end, here’s a rundown of the top stocks to buy for September, and perhaps beyond. In some cases these names are coming out of a prolonged lull, while others are seemingly stuck in unstoppable uptrends. In all cases though, the odds of standout strength are at least a little better than average. In no particular order … 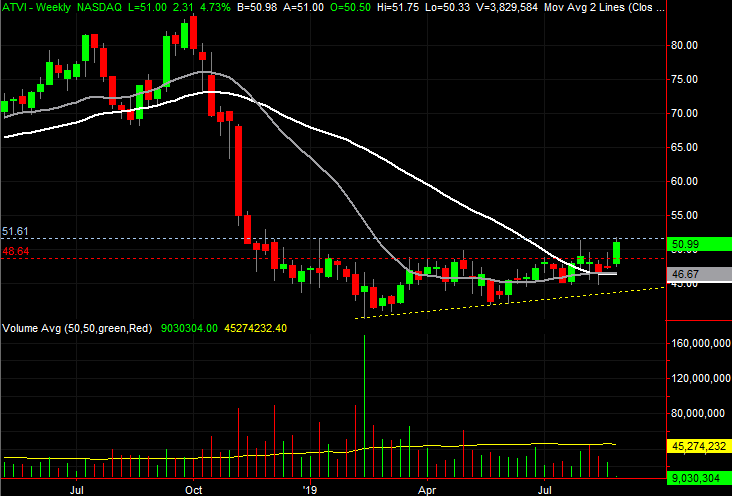 The final quarter of last year was a miserable one for Activision Blizzard (NASDAQ:ATVI), and its shareholders. Shares fell a total of 52% from peak to trough, as a couple of different missteps and missed opportunities took a toll. Namely, it didn’t see “Fortnite” coming, and its “Black Ops 4” title wasn’t as well-received as hoped.

The meltdown served as something of a wake up call for the company. While there’s still work to be done, the game publisher at least knows what’s left to do.

ATVI stock has also started to grind its way out of a hole, logging a string of higher lows since February’s bottom, and working its way back above the important 200-day moving average line. On the verge of punching through resistance at $51.60, the pace of the rebound could perk up very soon. 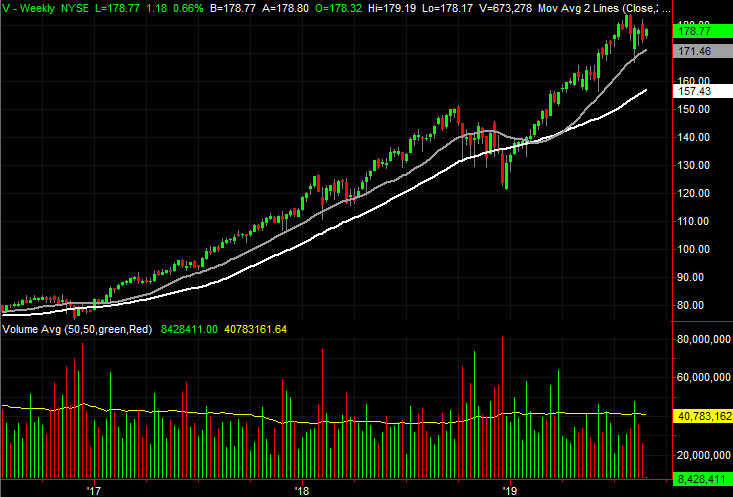 It’s an unusually persistent gainer. Granted, the gains aren’t necessarily red-hot and take a while to put in place. The rally also isn’t without its occasional flaws and stumbles. By and large, any setbacks Visa (NYSE:V) suffers are shallow and short-lived, and there’s a lot to be said for consistency. V stock is up nearly 130% since the end of 2016 thanks to its steady march forward.

Now is a compelling time to step in too, after a small stumble that pulled Visa shares back from its early August high near $184 to a low of $167. All it took was a kiss of the 100-day moving average line, plotted in gray, to renew the rally. That may be all the dip we’re going to get.

It’s not a cheap stock, valued at 34 times its trailing earnings and more than 28 times next year’s projected profit. A frothy valuation hasn’t held Visa shares back at any point in its past though. 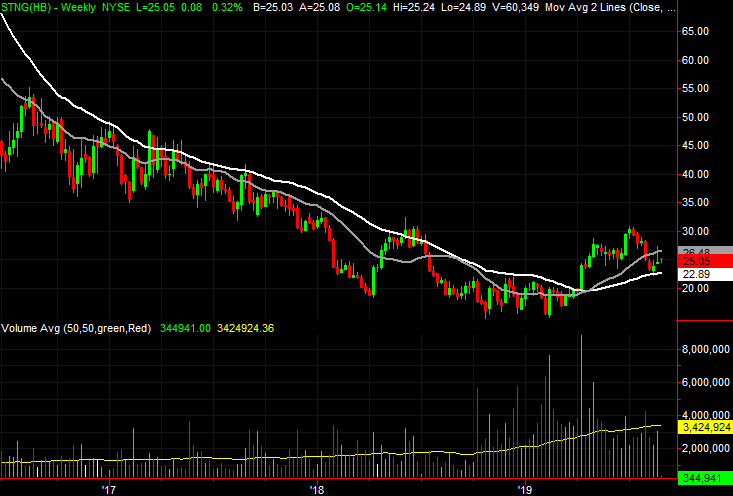 Scorpio Tankers (NYSE:STNG) shares rolled over in 2015, and never looked back … until April of this year, when something clearly changed. STNG stock broke out of a long-standing and well-established rut. The company reported its first quarterly profit since 2016. Despite all the trade war noise and inconsistent pricing of crude oil, shipping rates improved enough to let the company book net earnings of 30 cents per share. That was more than twice what analysts were expecting.

The enthusiasm that re-ignited STNG stock in April has since cooled. Take a closer look at the chart, however, and you’ll see the 200-day moving average line, in white, is trying to renew the recovery effort.

It’s still one of the top stocks to buy for that reason, not to mention the shipping rates that improved enough to drive a swing to a profit are improving again after a summer lull. 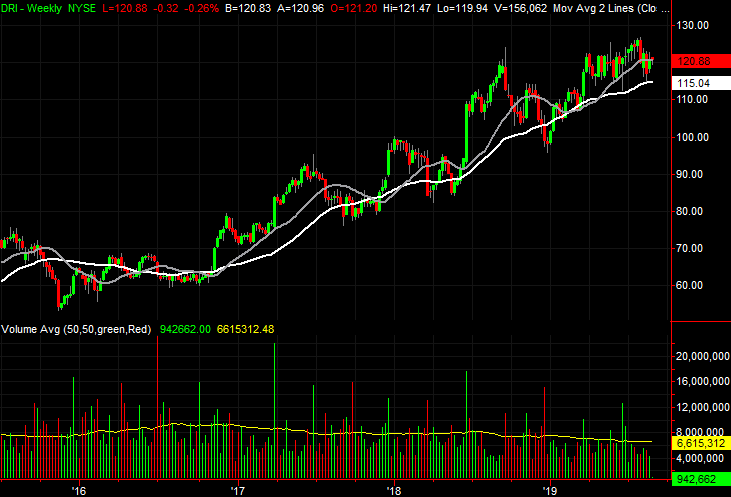 The restaurant business isn’t usually a highly profitable one. It’s also an industry that’s particularly vulnerable to recessions. But, Darden Restaurants (NYSE:DRI) is a proven operator. Assuming the chatter about a global economic headwind is more bark than bite, Darden’s business will be fine.

To that end, analysts are calling for more than 6% worth of sales growth this year, which should drive profits from last year’s $5.82 per share to $6.40, and then on to $6.86 per share next year.

Arguably the biggest reason DRI stock has earned a spot on a short list of stocks to buy headed into September, however, is its reliable forward progress. It’s hardly a straight line, but this is a name that has rewarded buyers who’ve stepped in on the dips like the one we’re in the midst of making. 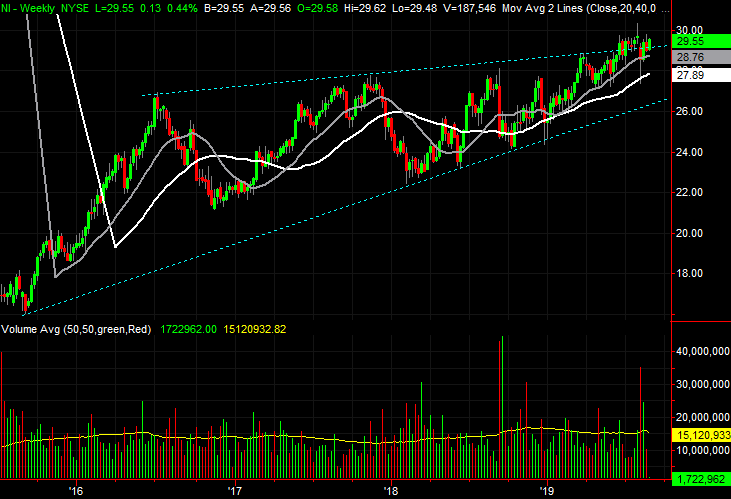 It’s not a fast mover, but what NiSource (NYSE:NI) lacks in speed it makes up for in reliability. Shares of the utility name are up more than 50% since the end of 2016, and investors didn’t have to experience any seasickness to reap that reward.

That being said, this chart started to take on a curious shape earlier this year, when it broke above the upper boundary of a converging wedge pattern, framed in blue, that had been guiding it upward since late-2015. Rather than peel back from it, NiSource shares have fought their way above it, using support found at the gray 100-day moving average line.

It’s got a lot to do with falling interest rates. But, inasmuch as rates are apt to remain suppressed for the foreseeable future on top of NiSource’s history of steadily increasing payouts, NI stock could be a nice, safe place to tuck away some capital while the broad market gets its bearings. 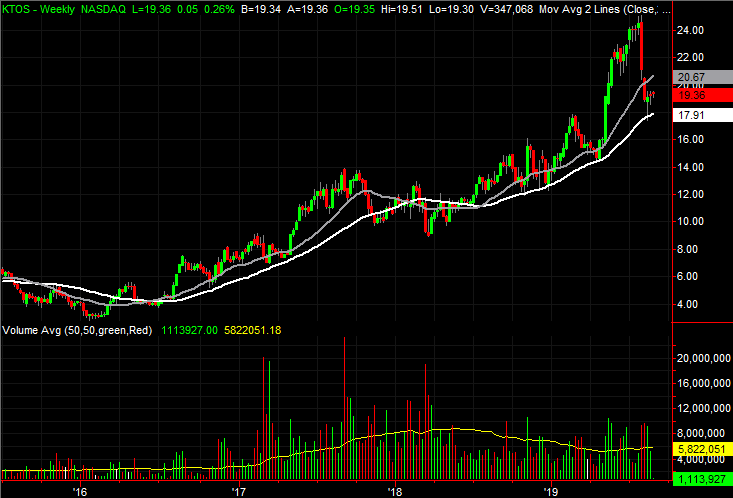 Kratos Defense & Security Solutions (NASDAQ:KTOS) is anything but a household name. With a modest market cap of only $2.1 billion, odds are good most investors have never even heard of it.

Don’t let its obscurity fool you though. This little defense contractor is getting real big, real fast. Revenue is projected to grow 18% this year, and then do the same in 2020, driving the bottom line from last year’s 24 cents per share to 32 cents this year to a whopping 49 cents per share next year.

The market appreciated this growth pace — in spades — in May of this year, but perhaps too much. That big rally set the stage for a wave of profit-taking. The selloff stopped and started to reverse once the 200-day moving average line was met last week though, making now a compelling time to step in. 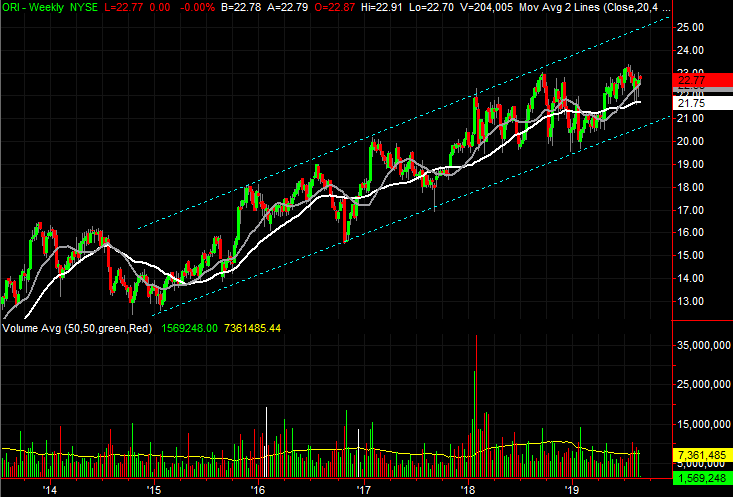 If the name Old Republic International (NYSE:ORI) rings a bell but you can’t quite remember why, think insurance. The company operates several different insurance businesses, some of which use the moniker, while others don’t. Old Republic is also the parent of outfits like Great West Casualty Company and BITCO.

For a variety of reasons ranging from interest rate turbulence to an inordinate number of devastating hurricanes, to the growing unpredictability of lifespans, the insurance industry has been an increasingly tough one to manage. Old Republic has made it look easy, consistently driving revenue growth while driving less consistent income growth for a decade now. Twelve-month revenue of $6.6 billion is markedly better than the twelve-month revenue tally of $5.5 billion from five years ago.

That’s a key part of the reason the stock has managed to make reliable, even if choppy, forward progress. It’s an especially interesting prospect right now, as ORI stock is still closer to the bottom of its rising trading range than the top of it. 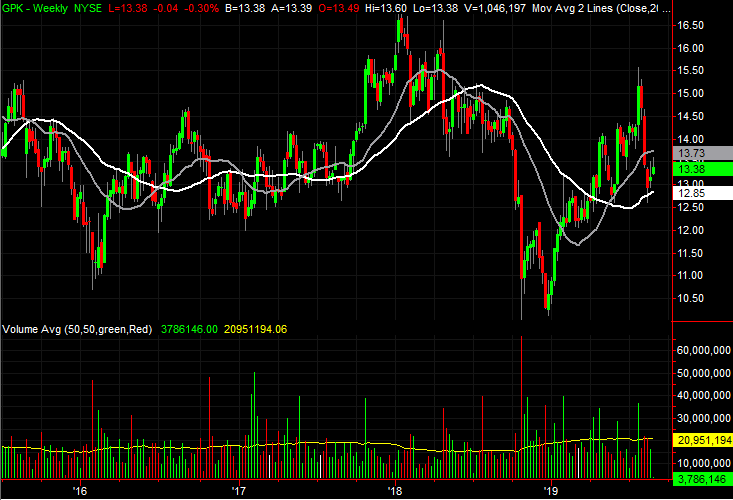 Graphic Packaging Holding (NYSE:GPK) has taken shareholders on a roller coaster ride over the course of the past five years, from a high above $16 to a low below $10, yet is currently priced where it was as of late-2014.

The market may have been unduly doubtful of Graphic Packaging’s potential, particularly of late. This year’s expected revenue growth of just under 3% isn’t jaw-dropping, and next year’s modeled 2.4% improvement is even less thrilling. Modest sales are driving less-modest earnings growth, however, of 6% this year and 15% in 2020, according to analysts.

To that end, analysts believe investors are collectively undervaluing GPK stock. They rated it a little better than a “Buy,” and hold a consensus target price of $16.70, versus its current price of $13.40. 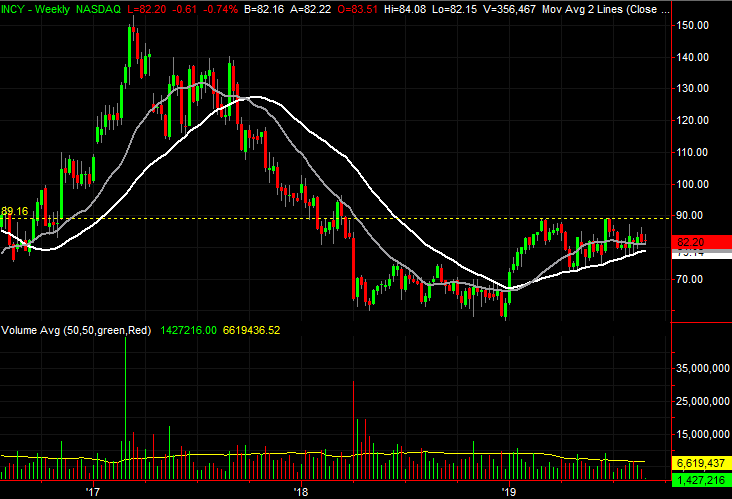 Like most biopharmaceutical stocks, Incyte (NASDAQ:INCY) is no stranger to wide, prolonged swings. Shares rallied from around $65 in early 2016 to a high of $149 by early 2017, back to a low of around $58 late last year.

If you can catch one of the stock’s turning points though, it can lead to a big payoff. It looks like the stock’s trying to make good on the bullish pivot that materialized in December. Though that bounce cooled in April and has since done nothing, a closer look makes clear that INCY stock is finding persistent support at its rising 200-day moving average line, plotted in white.

There’s still a key technical ceiling around $89, where Incyte shares peaked a couple of times this year. But, with double-digit sales growth expected this year and next thanks to strong interest in its relatively young cancer drug Jakafi, the odds of a breakout are a little too good to ignore. 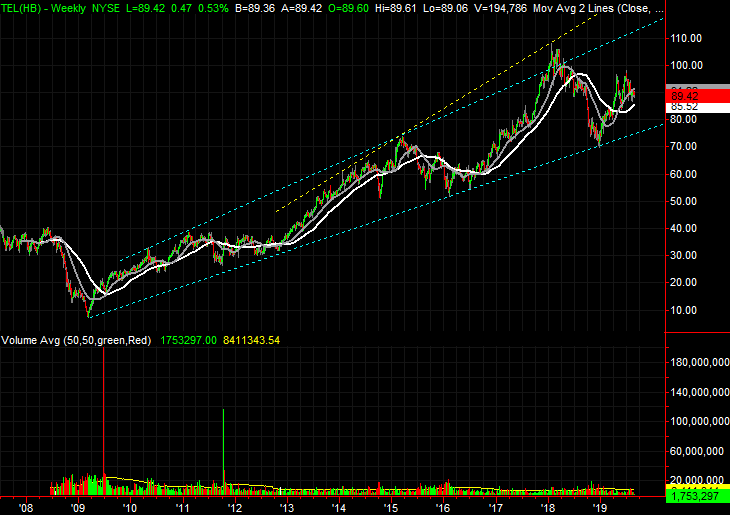 Finally, add TE Connectivity (NYSE:TEL) to your list of prospective stocks to buy before we get too deep into September.

Like Kratos, TE Connectivity isn’t exactly a household name, for a couple of reasons. Chief among them is the fact that it’s based in Switzerland. The other is that it makes electronics components most people don’t give a second thought to. Wires, heat shrink tubing, and cable connectors are all part of its portfolio. RF antennas would be considered the high-tech portion of its product menu.

What it lacks in pizzazz, however, it makes up for in reliability. The advent of 5G wouldn’t be taking shape without the simple pieces and parts TE Connectivity provides, but there’s always some sort of electronics evolution that keeps TE Connectivity moving forward.

One has to zoom way out to see it, but the push up and off of a long-term support line going back to 2009 has set the stage for a multi-year advance that has only just begun.